Australia’s rising stars are finalising their preparations ahead of the Junior Davis and Junior Fed Cup by BNP Paribas world finals. 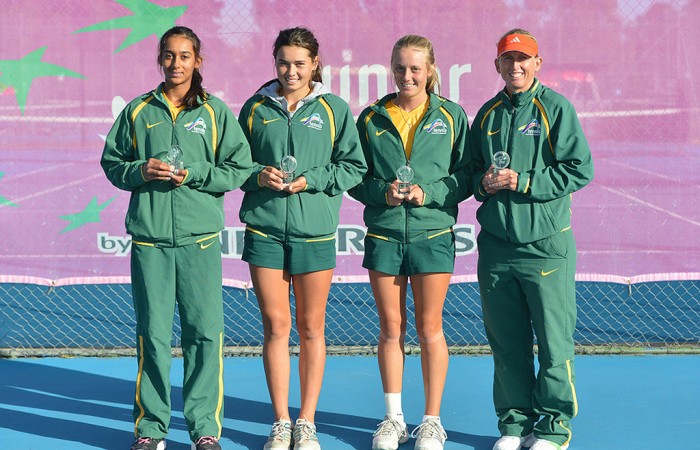 Australia’s rising stars are finalising their preparations ahead of the Junior Davis and Junior Fed Cup by BNP Paribas world finals, scheduled to take place on clay later this month in Barcelona, Spain from 25-30 September 2012.

The boys will travel to Hamburg today following a call-up to act as ‘orange boys’ for Australia’s Davis Cup team in the World Cup Play-off tie in Germany this weekend.

Junior Davis Cup captain Mark Woodforde OAM said the opportunity to train alongside the senior team would be an invaluable experience for the boys.

“I honestly believe our young players need to experience the heart of our tennis history and start grasping with what possibly lies ahead for each of them as they progress through the ranks,” Woodforde said.

“Arriving early in Germany allows the team to acclimatise to the clay and perhaps be inspired by the Australian team.

“The last few years this competition has been played on hard courts in high altitude with pressureless balls that were hard to control. The hurdle this year is competing on the slow clay, home to a nation that produces some of the world’s best tennis players,” added Woodforde.

It will be the first time Bourchier will play for Australia and comes after his formidable success on the ITF junior circuit over the past couple of months.

The Tasmanian has won three ITF junior titles this year, most recently the Oceania Closed Junior Championships in Fiji, contributing to a career high world junior ranking of 63.

Both Kokkinakis and Mott also come into the side with some solid match play on the ITF Pro Circuit and share a wealth of representative experience having both competed in the World Junior Tennis competition in 2009 before being part of Junior Davis Cup squads in 2011. Kokkinakis most recently played for Australia in the Asia qualifying tie staged in Bendigo earlier this year.

Following Hamburg, the Junior Davis Cup team will join the Junior Fed Cup team at Tennis Australia’s European base in Munich for an additional week of training.

“I was rapt to get that win,” said Bains from the tournament in Far North Queensland.

“I’m excited to play for Australia again; we have the same team as in qualifying so we know each other which makes a difference. Hopefully we can do pretty well over there.”

AIS Head Women’s Coach and Junior Fed Cup Captain Nicole Pratt said the girls had been working hard and were keen to don the green and gold again.

“The experience in Bendigo has given the team a great foundation with the girls even more determined to get out there and do well for Australia,” said Pratt.

“The girls have been training well and getting some matchplay, which gives them great confidence heading into Spain.”

The team will be looking to defend the Junior Fed Cup title, which was won last year by Ashleigh Barty, Brooke Rischbieth, Belinda Woolcock and captain Ken Richardson.