Aussie duo Nick Kyrgios and Jordan Thompson have fallen in the US Open boys' doubles final in a nail-biter, going down in a match tiebreak. 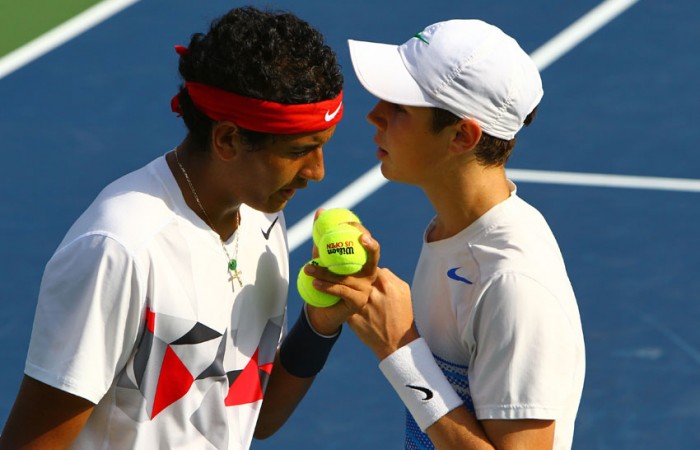 Aussie duo Nick Kyrgios and Jordan Thompson have fallen in the US Open boys’ doubles final in a nail-biter, going down in a 10-point match tiebreak after scores were locked at one set all.

In the end, No.8 seeds Kyle Edmund and Frederico Ferreira Silva had a little too much polish, minimising their errors in brutally gusty conditions at Flushing Meadows to win 5-7 6-4 [10-6].

“Losing in a super-tiebreak is not easy, but it’s better than getting smashed … it can go either way, so probably makes it a bit more disappointing,” Thompson reflected.

The Aussies went down a break in the first set but recovered to level scores, and as Edmund’s volleys dissolved in the 12th game, they pounced, using the wind to their advantage when lobbing the ball to remain alive in an exciting rally and eventually taking the opening set.

The British-Portuguese pairing rebounded in the second, breaking serve twice on their way to levelling the match.

“A couple of things didn’t go our way, and they obviously took advantage of that, they saw a small gap and they took the second set … (we were) just unlucky I think.”

Edmund and Silva rode their momentum into the match tiebreak, leading 4-2 at the first change-of-ends. But thanks to some monstrous returning and serving from Kyrgios, the Australian No.6 seeds wrenched the lead back.

It was in the rapid-fire net exchanges that followed, however, that the No.8 seeds came out on top. It helped them score a bundle of match points, and they ultimately clinched the win after forcing an error.

Despite the loss, Thompson achieved a milestone by reaching his first junior Grand Slam final, while for Kyrgios, an appearance in the US Open boys’ doubles decider marked the third straight major at which he had featured in the title match.

“There’s obviously a lot of improvement I still have to make … but it’s a great way to finish off the year,” Kyrgios said.

“I thought I had a great season, I really improved the way I’m moving, my fitness, and even the way I’m striking the ball. My serve’s gotten a lot better – it’s helped me out a lot – and yeah, I think I’ve just got to continue to think positively.”