Not many gave Sam Stosur a hope of beating Victoria Azarenka at the US Open, but excellent play saw the Aussie go very close to proving them wrong. 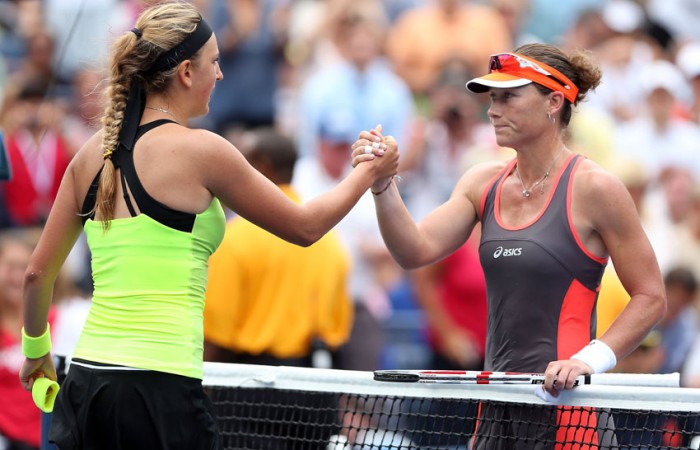 Not many people gave Sam Stosur a chance coming into her US Open quarterfinal match against Victoria Azarenka. The general feeling was that the top seed would make quick work of the tournament’s defending champion, continuing a pattern of dominance that had helped the Belarusian forge a 6-0 record in their head-to-head.

And who could blame them? Not only did Azarenka own the match up, but she owned it comfortably. Apart from a competitive affair in Los Angeles in 2008 – which Azarenka still won in straight sets – Stosur had never been able to collect more than five games in a match with the 23-year-old. Stosur herself even admitted that she had at times played “pretty atrociously”.

Azarenka’s height, returning prowess, ability to take the ball early, and flat, penetrating shots were assumed to neutralise Stosur’s major weapons – kick serve and forehand – and rob her of the time to successfully deploy them.

And when the Australian quickly fell behind 6-1 2-1 in their match on Arthur Ashe Stadium on Tuesday, it seemed the tennis pundits had been accurate in their forecasting.

Nobody else may have believed she could reverse a seemingly inevitable result, but Stosur, to her credit, genuinely did.

“I had a pretty good idea of what I wanted to do out there today. The first set didn’t really come off at all … But I really thought I should stick to what I was trying to do,” she said.

She began to lash out on her forehand with a little more pace and spin, getting Azarenka on the run and away from her beloved centre mark on the baseline. She injected her backhand with vicious slice, keeping the ball low and slow to change the pace of rallies. She played some of the best defence of her career, staying alive in rallies with desperate retrieving and the odd moon-ball to recover her position.

Also of note was her spectacular squash-style forehand, which Stosur on several occasions flicked back while on the run, the ball skimming the net with wicked spin and trajectory, flummoxing Azarenka and drawing gasps from the big crowd on Arthur Ashe Stadium.

“I don’t know where they come from, but the last few years I have managed to pull quite a few off,” Stosur revealed.

“It’s not a shot I necessarily practice too much. I guess I’ve got the timing on it and I think my opponents don’t know what to do with it when it comes just lasering over the net.”

Bit by bit, her approach began to pay dividends. She broke serve in the seventh game of the second set, riding her advantage to snare the second set – the first set she had won in her career against the Belarusian. The crowd, firmly in her corner to begin with, cheered loudly. They had a match on their hands.

It threatened to be a blowout in the third set when Azarenka moved to a 4-2, 40-15 lead. But again, Stosur showed impressive resolve and belief and fought her way back into contention. With sublime footwork helping her set up successfully for her forehand, she was able to pummel several winners off that wing – 18 in total – to insert herself back in contention. A panicky, failed drop shot from Azarenka helped her break back, causing the world No.1 to lash the ground with her racquet. Stosur was beginning to win the mental battle.

It looked as if she might score a famous and popular victory when she levelled the third-set tiebreak with a powerful smash, but Azarenka – thanks to a more successful drop shot this time – was able to win the last two points to squeeze out a 6-1 4-6 7-6(5) victory after almost two-and-a-half hours.

“Of course there’s always going to be disappointment when you lose a quarterfinal of the US Open, but I have to say I’m really pleased with the way I played. I thought it was a really, really good match, and there was, what, a point or two in it,” Stosur said afterward.

“I gave it everything I had.”

You couldn’t ask for anything more. Nor could the crowd, who witnessed the best match of the women’s tournament and contributed to a fantastic atmosphere on Flushing Meadows’ premier court. It was the first time in five years that a women’s match that deep in the event had been decided in such tight circumstances.

Azarenka joined the fans in applauding Stosur off Arthur Ashe Stadium, recognising the Aussie’s fight and extremely relieved to come through such a torrid battle.

“For sure she really pushed me to dig deep. We fought really hard … I think that the quality of tennis was really high, and it was tense because it could go either way,” Azarenka reflected.

And so Stosur’s title defence comes to an end. But rather than view it as a missed opportunity, or even a failure, she is taking plenty of positives away from her fortnight in New York.

She cited the fact that she had been able to produce some of her best tennis of the year despite coming into the event a little low on confidence and form. Plus, there was the boost to her belief that she can one day turn the tables on Azarenka, arguably her toughest opponent on the women’s tour.

“For sure. I mean, she’s a tough player, but I think I’m capable of beating her one day. Just would have liked it to have been today,” she said.

“I will certainly take a lot of confidence out of this match and out of the whole week.”

Stosur’s next move will be to head to her base in Florida, where she will pack up some her belongings before making a welcome return home to Australia. From there, she’ll contest the Asian swing, with tournaments in Tokyo, Beijing and Osaka.

Her remaining goal for the year will be to qualify for the WTA season-ending championships in Istanbul, the prestigious event open to the world’s top eight women. She’s currently sitting at No.9 in the race.

If she encounters Azarenka in any of those upcoming events, the Belarusian had better watch out.