US Open: Stosur falls to Azarenka in thriller

UPDATE 7:00AM: Sam Stosur has gone down in the US Open quarterfinals, but not before a glorious two-and-a-half hour, three-set battle with Victoria Azarenka. 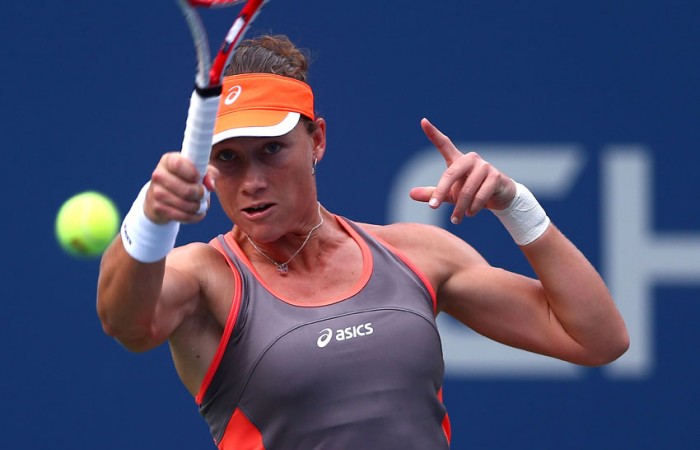 Samantha Stosur’s gallant US Open title defence is over after the Australian suffered a three-set loss to world No.1 Victoria Azarenka in a high-octane quarterfinal at Flushing Meadows.

Stosur won her first set against Azarenka in seven career encounters, but still came up just short as the Belarusian prevailed 6-1 4-6 7-6(5) in a cliffhanger lasting almost two-and-a-half hours.

Stosur came extremely close, conjuring a break point – a mini match point – in the 11th game of the deciding set, but Azarenka saved it with her one and only ace before clinching an epic victory in the tiebreaker.

“Of course there’s always going to be disappointment when you lose quarters of the US Open, but I have to say I’m really pleased with the way I played,” Stosur said.

“I thought it was a really, really good match and there was, what, a point or two in it. I gave it everything I had.”

The defeat was Stosur’s first in 12 matches in New York since a similarly tough three-set quarterfinal loss to eventual champion Kim Clijsters in 2010.

The extraordinary quality and evenness of the match was reflected in the statistics where Stosur edged Azarenka in almost every key department – except in the final scoreline.

“I have no words. You could feel the pressure,” Azarenka said after reaching the last four for the first time in New York.

“We played some great tennis. The level was so high. We both gave it our all. I think she played amazing. She made me play my best tennis. She kept hitting the lines.”

That Stosur even managed to make a contest of it after Azarenka steamrolled her in the first set was a feat in itself.

Early on, Stosur had no answer to the Australian Open champion’s awesome firepower and control.

Stosur made a dire start, broken to love inside a minute in the opening game of the match and then again to fall behind 4-0 either side of a 90-minute rain delay.

Just winning a rally, a point, was a struggle for Stosur as Azarenka dictated from inside the baseline. But somehow Stosur turned the match around as the tempo rose significantly in the second set.

Feeling the strain, Azarenka double-faulted and then was unable to control a wide-angled forehand from Stosur as the titleholder’s grit went rewarded with a decisive break in the seventh game.

Stosur held her nerve and serve from 15-30 to close out the set to force the decider.

Stosur dropped serve from 30-0 up in the fourth game to trail 3-1, only to step up and break back the very next game.

But she looked in deep trouble when the top seed jumped to a 4-2, 40-15 advantage with her sixth service break.

Stosur refused to go away, inducing an Azarenka racquet-smashing dummy spit with her incredible scrambling to get back to deuce.

Stosur then rifled an off-forehand return winner not dissimilar to the one she delivered on match point against Serena Williams in last year’s final to get back on serve.

It looked all over when Azarenka charged to a 4-0 advantage.

But Stosur rallied again and had the chance on serve at 5-5 to move to match point.

However, a forehand from the Australian caught the tape, allowing Azarenka to pounce and then seal victory when Stosur couldn’t control a deep forehand on match point.