Sam Stosur’s serve was key during her fourth-round win over Laura Robson, something she hopes will help her to turn the tables on Victoria Azarenka. 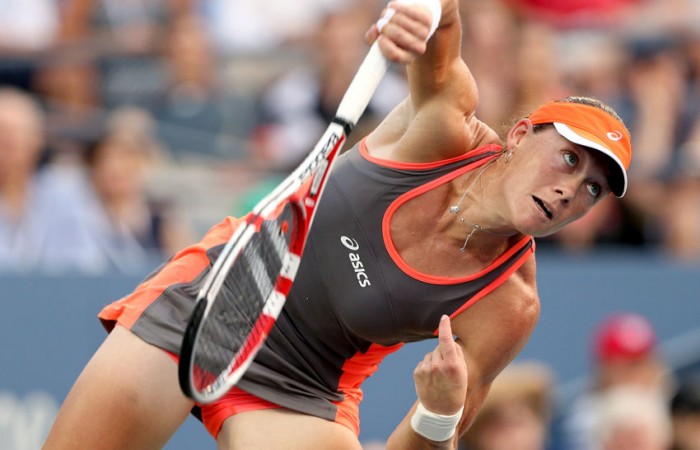 Among those on New York Subway’s 7 train headed for Flushing Meadows on Sunday was a group of young men, trading banter and contributing to the lively atmosphere in a carriage full of tennis fans buzzing with anticipation ahead of the Day 7 action.

The conversation among the group invariably turned to tennis, and how they figured the day’s play would unfold. One of the matches on the schedule that had caught their eye was the fourth round battle between Sam Stosur and Laura Robson.

“Robson won’t be able to handle Stosur’s kick-serve,” one proclaimed.

“Robson can cause her some trouble with her forehand going into Stosur’s backhand. But Stosur’s kick serve is awesome.”

Several hours later, their forecasting proved accurate. Stosur’s serve was the key throughout her 6-4 6-4 victory over the dangerous young Brit, an atmospheric match played in the late afternoon sun on a packed Louis Armstrong Stadium.

Time and time again, Stosur surprised Robson with her delivery, forcing return errors off the Londoner’s racquet or wrong-footing her with a well-timed ace or service winner.

“I thought she managed to mix it up really well. In other matches that I’ve seen her play she tends to go for the wide serve on the ad side a lot. Today she really mixed it up to my backhand,” Robson commented.

“The few times where she did hit a second serve, a kick to my forehand, I wasn’t really ready for it, and it’s definitely hard to control that shot.”

It was lucky the Australian such a weapon to call on – she really needed it against the world No.89, who showed her pluck and fight in the biggest match of her fledgling career. Having defeated Kim Clijsters and Li Na on her path through to the fourth round, her stay in New York looked to be rapidly coming to an end when Stosur forged to a 6-4 5-2 lead.

But Robson saved an incredible eight match points with some free-swinging play, cutting down her unforced errors and feeding off the energy of the crowd, which had stirred to life now that a close contest appeared to be unfolding.

Several dramatic rallies played out, including the final exchange in which a Robson groundstroke caught the tape and dropped short, allowing Stosur to come to net and draw one last error from the Brit’s racquet to complete victory in one hour and 38 minutes.

The fact she remained so calm and poised in a situation where many others before her have panicked was something that particularly pleased Stosur.

“If you’re not doing the wrong thing on those points, you can’t get too down on yourself,” she said.

“You’re hopefully going to get another chance if you keep doing what you should be doing. That’s kind of what I said to myself on the change of ends (at 5-4) … I still felt like I was in a good position.”

After coming through her first four matches in Flushing Meadows in straight sets – her win against Robson was her 15th from her past 16 US Open outings – things will get exponentially tougher now that she’s into the quarterfinals, her third straight trip to the last eight in New York.

Stosur takes on world No.1 Victoria Azarenka, who has been in even more devastating form than Stosur herself and who has never dropped a set to the Australian in six career meetings.

While some matches have been close contests, such as when Stosur stretched the Belarusian to 6-4 7-6(4) in their 2008 battle in Los Angeles, many more have been drubbings – Azarenka beat Stosur 6-1 6-0 in Miami in 2009, as well as in the Doha final earlier this season, dropping just three games.

Stosur does not shy away from her forgettable record against the 23-year-old.

“She just stays very close in the court, stays on the baseline, returns very well, and takes time away from you. I think it’s one of these things you’ve got to be absolutely 100 per cent prepared for. You know you have to be ready as soon as you serve. Just have your mindset and your game plan and really stick to it.

“I think there’s a few things I’ve learned over those last few matches. Hopefully I can put all those into play and have a better match and hopefully a very good one.”

Strangely, despite being the defending champion, there really is no pressure on Stosur. She has played to her seeding by reaching the quarters and goes into the match as a definite underdog, affording her the luxury to swing freely.

Azarenka, meanwhile, has the task of justifying her No.1 ranking, something that has been challenged by the stellar form of Serena Williams and the three straight-set pastings she’s suffered at the hands of the American in 2012.

And then, of course, there’s the Aussie’s famed serve.

“I think I’ve been serving very well out of all of these matches. Out of these four matches, I’ve only had one or two bad serving games. That’s going to be pleasing going into the next match,” Stosur said.

“(Against Robson) I tried to hit my first serves, be aggressive with that, and just be aware of where I was hitting my seconds. I guess that’s pleasing to hear I did everything right.”