UPDATE 6.05AM: Lleyton Hewitt fought hard but ultimately went down in a high-quality four set match to No.4 seed David Ferrer on Sunday at the US Open. 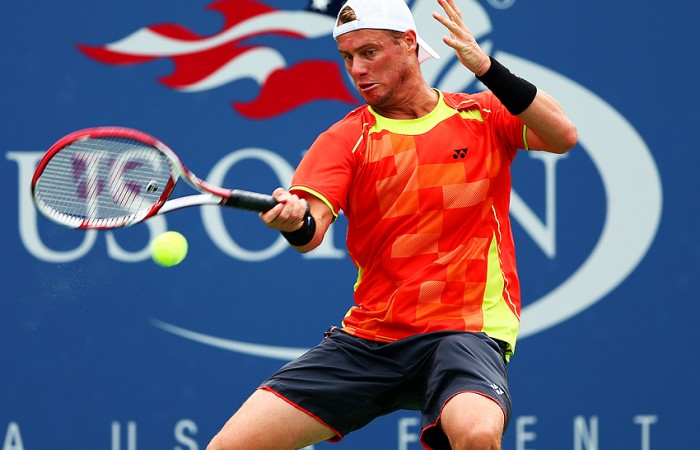 Big-hearted Lleyton Hewitt is out of the US Open after losing a brutal third-round encounter with world No.5 David Ferrer.

For two magnificent sets, Hewitt threatened a boilover before the indefatigable Spaniard chiselled out a 7-6(9) 4-6 6-3 6-0 victory in three hours and 12 minutes on Sunday.

Backing up from his epic four-hour, 35-minute second-round win over Gilles Muller, Hewitt was ultimately left to lament not converting any of five set points in the opening set.

Even in defeat, Hewitt’s performance was full of guts, determination and old-fashioned tennis know-how.

Ferrer, the man who stopped Rafael Nadal’s quest for a grand slam sweep at last year’s Australian Open, had to pull out all stops to deny the 31-year-old Australian wildcard.

Regarded as a human backboard, Ferrer is revered for never missing and getting every ball back.

But in a measure of the quality of tennis on display at Louis Armstrong Stadium, Ferrer committed 43 unforced errors trying to put Hewitt away.

Hewitt made 72 as the two court gladiators bludgeoned each other from the baseline and shot for the lines.

At times, Ferrer’s scrambling was jaw-dropping.

The fourth seed’s prize is a fourth-round date on Tuesday with either French 13th seed Richard Gasquet or young American Steve Johnson.

“It takes another quality player to beat me again,” said Hewitt, who lost to Novak Djokovic at the Australian Open and Jo-Wilfried Tsonga at Wimbledon.

“Early on, he wasn’t giving me any cheap points out there. It was tough to get games. His depth was exceptional right from the word go.”

Hewitt showcased all his remarkable fighting qualities in a classic opening set.

He fought off eight break points in the first five games alone, falling behind 1-3 and love-30 before holding to stay in the set.

He was rewarded with a break back the next game and was desperately unlucky to lose the tiebreaker.

He had three straight set points at 6-3 and, apart from one tentative Hewitt backhand into the net, Ferrer saved them all with some ridiculous retrieving before stealing the set when the Australian faltered with an attempted backhand drop shot.

“I was fighting hard to sort of just stay in touch in the first set and then I started putting a bit more pressure on him,” Hewitt said.

“Got back on level terms and then for most of the tiebreak I was on top obviously.

“It could have gone either way. I’m not saying I was going to win, but if I’d won the first set would have made life a bit easier.”

A lesser player would have had enough, but Hewitt shook off the disappointment of losing the 74-minute first set to immediately break Ferrer’s serve at the start of the second.

He dictated the rest of the set but, with Ferrer playing some amazing tennis, he was never truly safe until back on level terms.

A concentration lapse proved costly as Hewitt dropped his next service game from 30-0 up to give Ferrer a 3-0 advantage in the third – and that was all the world No.5 needed to take the set.

Ferrer rolled through the fourth set after a tiring Hewitt double-faulted to drop his opening service game and was unable to recover.