US Open: Stosur marches on

Sam Stosur has made her way through to the second week of the US Open, toughing out a win against No.31 seed Varvara Lepchenko. 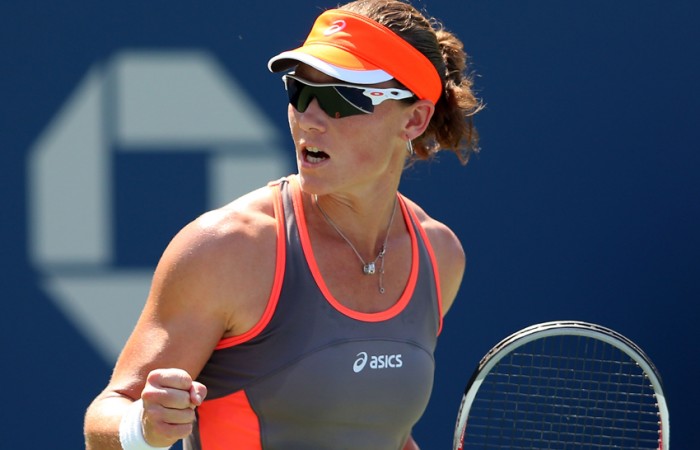 Defending champion Sam Stosur has served up a treat to reach the last 16 of the US Open with a straight-sets disposal of American Varvara Lepchenko.

Apart from the opening game of the match, Stosur dropped just seven points on serve in an impressive 7-6(5) 6-2 victory over the 31st seed.

With five more aces, Stosur has now rocketed down 20 untouchable deliveries this campaign – more than any other woman in the tournament.

Stosur was thrilled with her serving display after setting up a mouth-watering fourth-round showdown on Sunday with giant-killing British teenager Laura Robson.

“Apart from that first service game, I felt like I served very well,” the seventh seed said.

“As the first set went on and then throughout the second set I held pretty comfortably throughout.

“As I was doing that, I would put a bit more pressure on her service games. That’s kind of how the match unfolded. That’s how I was able to get those run of games in the second set.”

Li, who claimed the Open lead-up title in Cincinnati, had been riding an eight-match winning streak just as Kim Clijsters had been on a 22-match unbeaten run at Flushing Meadows before falling victim to Robson the previous round.

“She’ll be full of confidence,” Stosur said. “I’ll have to be on top of my game.”

Stosur made a less-than-ideal start against Lepchenko, double-faulting on the opening point of the match, then hitting two forehand errors to drop serve.

But Lepchenko was worse, coughing up two doubles and almost air-swinging one backhand to return the favour.

After finding her service groove, Stosur gradually began to control the match, but was unable to convert any of four break-point chances before the first set was decided in a tight tiebreaker.

Stosur clinched it after 59 minutes when Lepchenko hit wide.

Some forceful ball striking earned Stosur an early break in the third game of the second set.

The titleholder consolidated with a love service game to charge ahead 3-1 and then broke the American’s serve – and spirit – once more to take a stranglehold on the match.

Yet another love hold advanced Stosur to 5-1 in the second and it was all over after one hour and 28 minutes when Lepchenko blasted a forehand return long on the Australian’s first match point.

Stosur’s victory was the 28-year-old’s 14th from her past 15 matches in New York.