Stosur going unnoticed at US Open

While Kim Clijsters' retirement and the form of Serena Williams and Maria Sharapova making headlines, Sam Stosur is sneaking through the US Open draw. 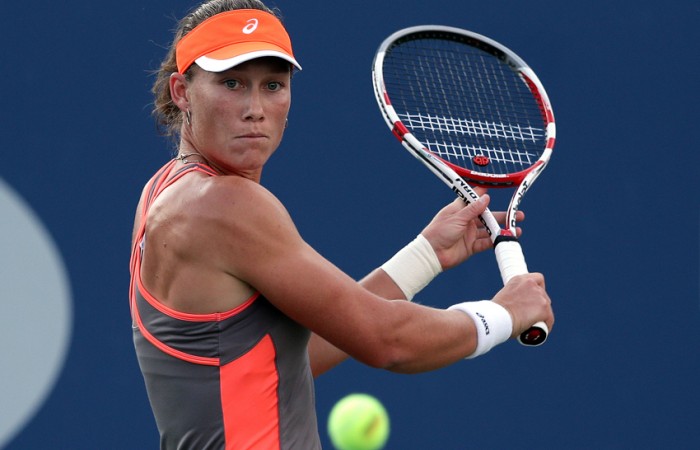 Just as Sam Stosur walked onto Louis Armstrong Stadium on Wednesday to play her second round match against Edina Gallovits-Hall, Kim Clijsters was being sensationally upset on Arthur Ashe, Laura Robson ensuring that Clijsters would player her last ever singles match at the US Open – and her career.

What followed was a lengthy press conference for the Belgian champion which extended well beyond the usually-allotted 10 minutes, with journalists cramming into the main interview room at Flushing Meadows to hear Clijsters’ reflections on a magnificent career.

The media event significantly delayed Stosur’s own press conference, who strolled into the room minutes later and delivered a short and sweet press conference before just a handful of reporters. It was a brisk affair much like her defeat of Gallovits-Hall, whom she polished off 6-3 6-0 in exactly an hour.

Stosur is progressing with little fanfare at US Open 2012, and flying under the radar thanks to Clijsters’ retirement and with the media and fan focus being on reigning Grand Slam champions Serena Williams and Maria Sharapova.

The defending champion, however, doesn’t mind a bit.

“I’ve got no problem being in the position that I’m in. I mean, I would have thought Kim retiring should be the main story no matter who wins today,” she said.

“I think the whole tour is certainly going to miss having her around. She’s been a great player and a great person. You know, I think for sure she would have liked to have gone a bit further in this tournament.”

Clijsters’ defeat certainly opens up the draw for Stosur – the pair were projected to meet in the fourth round. The Belgian is an opponent Stosur has never before beaten, with the closest the Queenslander got being a three-set defeat in the quarterfinals here in New York two years ago. Instead, should Stosur get that far, her likely fourth round foe would be Li Na, over whom she has a winning record of 6-0.

But first, Stosur must focus on her third round opponent, the left-handed Varvara Lepchenko. The Uzbek-turned-American defeated Stosur’s compatriot Anastasia Rodionova in the second round, and is enjoying a career-best season, seeded No.31 at this tournament.

“I’ve seen her play a little bit this year. She’s been winning more matches; her ranking has definitely risen. Got to get some background information,” Stosur said.

“I played (Lucie) Safarova in Montréal recently. I played (Ekaterina) Makarova in Cincinnati, as well. I guess that’s a good thing, having played a couple of lefties in a couple of weeks.”

Giving her confidence going into the Lepchencko encounter will be her form from the previous two rounds.

Stosur has dropped a total of five games in two matches, her performance against Gallovits-Hall picking up where she left off against Petra Martic on Monday. The Aussie relentlessly attacked the Romanian on Louis Armstrong Stadium, picking off 18 winners to six and advancing to the net regularly to win eight of 11 points.

“I’m feeling good. I feel like I’ve been playing well. Of course, there’s always things you want to go and fine-tune in these days off, which is what I’ll do,” she said.

“I think so far everything is going quite well, going good. I’ll definitely looking forward to this next match.”