US Open: Hewitt through in four

Lleyton Hewitt has shrugged off the loss of the first set to storm to victory over Tobias Kamke in four sets in the first round of the US Open. 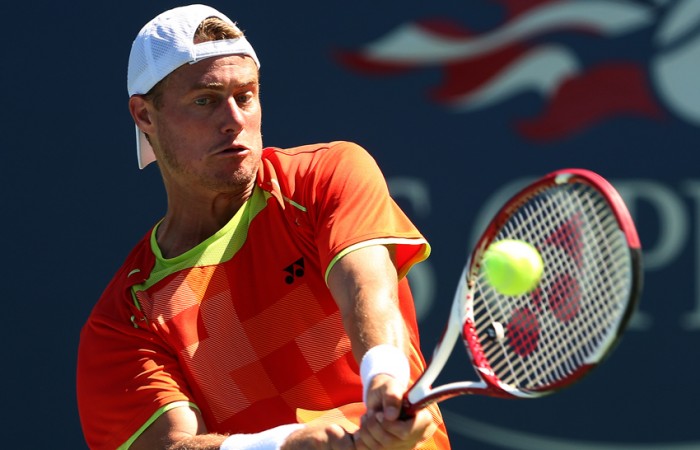 Lleyton Hewitt has produced a signature comeback to post his first US Open win in three years.

After missing last year’s championship with a foot injury, Hewitt returned to Flushing Meadows on Wednesday to score an impressive 4-6 6-2 6-1 6-4 victory over German Tobias Kambe.

His 42nd win in New York – second only to Roger Federer among active players – thrust Hewitt into a second-round clash on Friday with big-serving left-hander Gilles Muller from Luxembourg.

“It was a good effort by him to come back and win a tight five-setter,” Hewitt said.

“He’s a big left-hander with a big serve with a big, aggressive game. I’ll just start preparing for that tomorrow.”

Australia’s two-time finalist and 2001 champion beat Muller in their only previous encounter, on a hard court in Washington back in 2004.

Hewitt was not able to capitalise on a promising start against Kamke after breaking the German’s opening service game of the match to race to a 4-1 lead, get embroiled in what he described as a “dogfight” and dropping five games in a row to concede the first set.

He dug in, though, and achieved a key break when Kamke double-faulted to fall behind 3-1 in the second set.

Hewitt had to fight off several break points over two service games to maintain his advantage but was rewarded for his toil with a second break to take the set and level the match after 90 minutes.

Growing in confidence, Hewitt powered through the pivotal third set in 34 minutes and rammed home his dominance with his seventh and eighth service breaks of the match to advance after two hours, 48 minutes.

“It’s been rough since the Australian Open, being out with surgeries and not playing that many five-set matches,” Hewitt said.

“That was the nicest thing about getting through today’s match.”