Stosur picks up where she leaves off

The same good feelings from last year's US Open run immediately returned for Sam Stosur as she dissected her first round opponent on Monday. 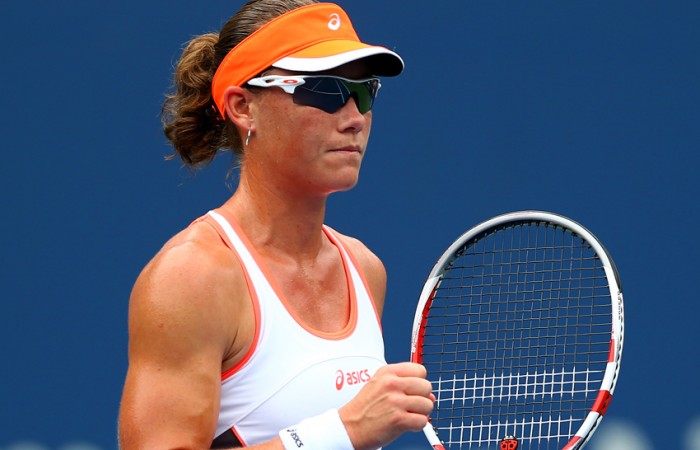 Another appearance on Arthur Ashe Stadium, and another comfortable win. It was as if Stosur had never left Flushing Meadows – as soon as she stepped onto the blue-and-green cement of the world’s biggest tennis stadium on Monday, the form she displayed in winning last year’s US Open title came straight back.

Stosur’s 6-1 6-1 opening-round victory over Croatian Petra Martic was, quite simply, an awesome display of power tennis. The Aussie won an incredible 19 straight points to start the match, before Martic finally gained her first by way of a Stosur double fault. With the Queenslander’s serve and groundstrokes firing – reaping 10 aces and 22 winners – she wrapped up victory in just 51 minutes.

The world No.7 said she had picked up where she left off in terms of her form at the 2011 tournament, which she hoped would be a good omen going forward this fortnight.

“As far as first rounds go, I was very happy with today. Last year I did feel that comfort out there and nothing bothered me; today was along the same lines,” she explained.

Stosur is developing an increasingly good rapport with the stadium court at Flushing Meadows. Given the honour of opening Day 1 proceedings on Ashe on Monday as the defending champion, she received a warm cheer from fans as she walked to the baseline to begin the match.

She said it felt fantastic to be back on the court that was scene of her greatest career success.

“It’s a nice pace out there, not too fast. It’s quite high bouncing. I think for me using the spin and the way I like to serve, I can use those things really to my advantage. I can get the ball up high straight from the word go. Then you can keep your opponent off balance,” she said.

“I think those couple of things combined made me feel comfortable out there.”

Yet it’s not just Arthur Ashe Stadium that seems to bring out the best in the Aussie No.1. Stosur has felt good ever since touching down at JFK Airport last Wednesday.

Saying how exciting it was to return to the buzz of New York City, Stosur looked happy and relaxed as she immersed herself in the build-up to the US Open, taking part in the draw ceremony with men’s defending champ Novak Djokovic, fulfilling multiple sponsor and media commitments, and interacting with fans by signing autographs and participating in a kids tennis clinic.

It was no different following her win over Martic – Stosur was in good spirits during her post-match press conference, willing to discuss a range of topics including whether she had entertained any thoughts of the repercussions of bombing out in the first round as defending champion.

“No, that didn’t pop into my head, which is a good thing,” she laughed.

“I think no matter whether you’re defending champion or whatever your ranking is and whatever the case is, (in the) first round you’re always going to have a little bit of nerves.

The last time Stosur came into a Grand Slam event with such high expectations placed on her was at Australian Open 2012, where, as the reigning US Open champion, the 28-year-old was widely tipped – and hoped – to end the home nation’s 34-year wait for a women’s singles champion. Instead, she fell in the opening round in straight sets.

But Stosur has analysed and processed that disappointing defeat, and believes she has learned a lot from the experience.

“(At) the Aussie Open I did freeze and it did kind of handcuff me. Since then I haven’t fallen into that trap again, so that’s a positive sign, I think,” she said.

It’s certainly an ominous sign for her rivals in the draw, especially Edina Gallovits-Hall, her opponent in the second round.

Whether or not she replicates her first-round performance remains to be seen. But with a victory secured, a day off to relax and a competitive hit-out on the Decoturf II surface under her belt, for Stosur, it’s great to be back in New York.