Lleyton Hewitt and Bernard Tomic have joined forces to plot Australia's assault on the US Open, preparing with a punishing pair of practice sets. 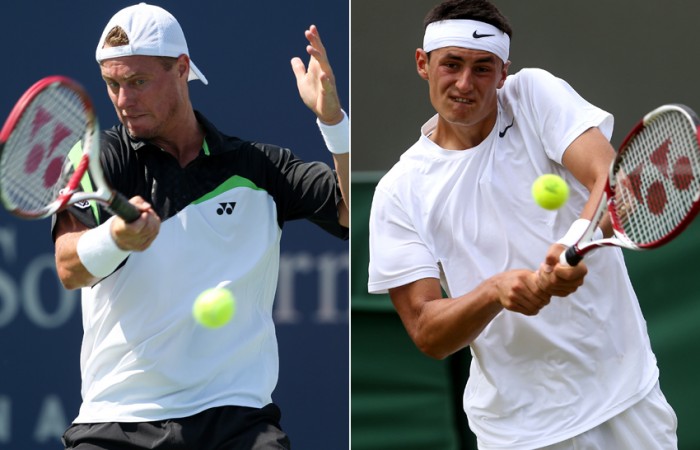 Lleyton Hewitt and Bernard Tomic have joined forces to plot Australia’s assault on the US Open at Flushing Meadows.

On Saturday at the Billie Jean King National Tennis Centre, the pair traded groundstrokes on Court 12 in preparation for the final Grand Slam of the year, which begins on Monday.

While Roger Federer wowed fans on Kids’ Day inside Arthur Ashe Stadium, it was standing room only as well for Hewitt and Tomic, as two generations collided in a sapping two-set practice match.

Hewitt, aged 31 and a US Open champion in 2001, edged 19-year-old Tomic, the veteran’s undiminished competitive fire coming to the fore during the 90-minute session.

In addition to leading Australia’s charge in the men’s draw in New York, Hewitt and Tomic will team up three weeks later in a pivotal Davis Cup World Group Play-off against Germany in Hamburg.

In the wake of a disappointing Wimbledon campaign, when no Australian man made the second round for the first time since 1938, Hewitt and Tomic’s united front was a welcome sight.

“It’s the way it should be,” said former Australian Davis Cup coach and US Open semifinalist Wally Masur.

“Lleyton wins and Bernie wins – and that’s what you want.”

Unseeded after falling to 43rd in the rankings, Tomic opens his title bid against Argentine claycourter Carlos Berlocq, the world No.44, with the winner likely to confront 2003 champion Andy Roddick in the second round.