Repeating her US Open triumph will be a tough ask for Sam Stosur, with the Australian placed in arguably the strongest quarter of the women’s draw. 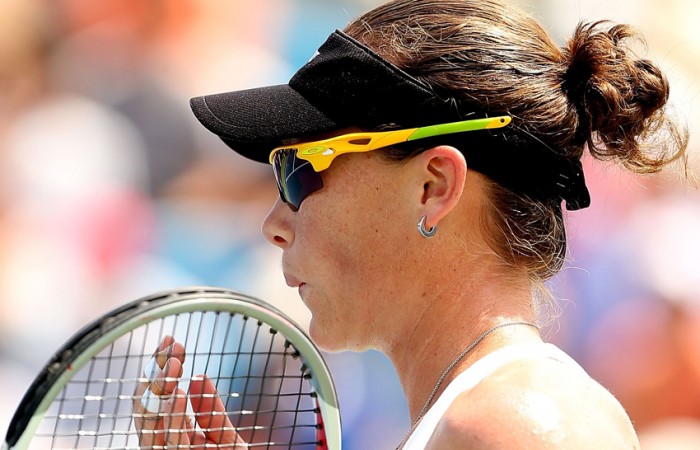 Repeating her US Open triumph will be a tough ask for Sam Stosur, with the Australian placed in arguably the strongest quarter of the women’s draw.

Stosur, the No.7 seed, faces a projected quarterfinal with top seed and world No.1 Victoria Azarenka, a player she is yet to take a set off in six career meetings.

But before she gets there, several other foes stand in her way, including three-time US Open winner Kim Clijsters and the in-form Li Na, recent winner of the Cincinnati title. Both Li and Clijsters are potential fourth round opponents for the Queenslander.

The first seed she is projected to encounter is No.31 Vavara Lepchenko of the United States in the third round.

Should Stosur come through her stacked quarter, a likely semifinal looms against either No.3 seed Maria Sharapova or fifth seed Petra Kvitova.

Yet despite the tough road ahead, Stosur says she is feeling good coming into the year’s final major tournament.

“It has been a year of a few ups and downs, but a lot of players go through that,” she said, speaking at the US Open draw ceremony which she attended along with men’s defending champion Novak Djokovic.

“I thought the last two weeks being on the hardcourts again I was feeling a lot better and a lot more comfortable on this surface.”

Stosur opens her title defence against Croatian Petra Martic, ranked No.65 and whose highlights in 2012 have included reaching the WTA Kuala Lumpur final and a trip to the fourth round at Roland Garros.

The pair have met once before, with Stosur gritting out a three set win in the first round at Madrid earlier this season.

“I think first rounds of Grand Slams, you’re always a little nervous for sure … But it’s a great position to be in. I’d rather be coming back as defending champ than not,” Stosur said.

“I’m looking forward to getting out on court, and make sure I don’t take anything for granted.”

Also landing in Stosur’s quarter of the draw are compatriots Casey Dellacqua and Olivia Rogowska.

Dellacqua, who remains alive in the Texas Tennis Open in Dallas and plays her semifinal on Thursday night, has drawn a qualifier in her opening round match in New York.

The winner will likely meet No.9 seed Li in the second round, provided the Chinese player gets past emerging Brit Heather Watson.

Rogowska takes on Luxembourg’s Mandy Minella, and should she progress faces a projected second-round meeting with 18th seed Julia Goerges of Germany.

In the quarter headed by Sharapova and Kvitova, and in the same half of the draw as Stosur, Dellacqua and Rogowska, sits Jarmila Gajdosova.

The Australian, currently ranked No.100, has been handed a tough draw against No.19 seed Nadia Petrova of Russia.

In the opposite half of the draw, fourth seed Serena Williams looms large as the tournament favourite following wins at Wimbledon and the London 2012 Olympics.

In arguably the weaker of the two halves, Williams opens against fellow American Coco Vandeweghe is projected to face Caroline Wozniacki in the quarterfinals. The winner will most likely meet in the semis either second seed Agnieszka Radwanska or No.6 seed Angelique Kerber, the most improved women’s player in the women’s game and a semifinalist in New York last year.

Venus Williams lurks as a dangerous floater in that half of the draw – having reached the semifinals at last week’s Cincinnati event – and faces wildcard Bethanie Mattek-Sands in her opener, a match likely to generate plenty of local interest.

The US Open kicks off on Monday 27 August at the Billie Jean King Tennis Centre in Flushing Meadows, New York.