Roger Federer has solidified his status as the world's No.1 with a straight set defeat of second-ranked Novak Djokovic in the Cincinnati Masters final. 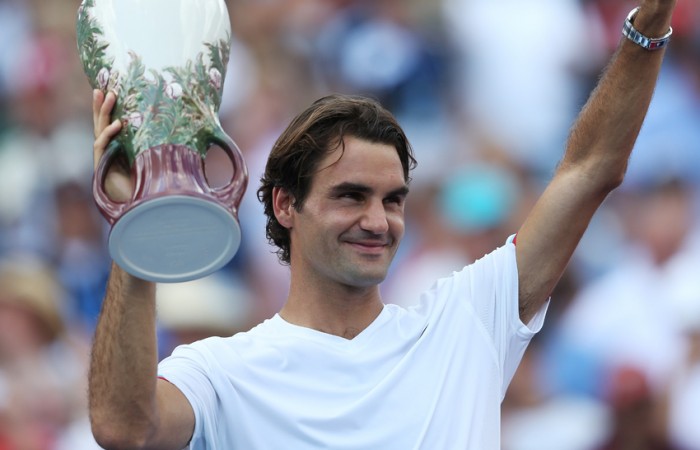 Roger Federer won his sixth title of the season as he beat Novak Djokovic 6-0 7-6(7) in a battle between the top two players in the world on Sunday at the Cincinnati Masters.

The Swiss completed a perfect week without losing serve as he won his 76th career trophy and his 16th match from 28 against his Serbian rival.

Federer goes into the US Open as a clear title favourite after becoming the first man to win five trophies at the Cincinnati event.

Federer’s success marked his 21st Masters 1000 trophy, putting him level with Rafael Nadal as the all-time best in that category.

“I’ve had a magical summer,” said Federer, who has also won a seventh Wimbledon title and a London Olympics silver medal.

“I feel good about New York – but I’m going to savour this one for a bit.”

Federer, 31, was the oldest Cincinnati winner since Andre Agassi, aged 34, took the trophy in 2004.

Top seed Federer shot out of the blocks at the start, winning the opening set in a mere 23 minutes. The pace slowed in the second as Djokovic collected his wits and began to challenge, taking the set into a tiebreaker.

The Swiss was unable to convert on a first match point, but promptly slammed down an overhead winner to save a Djokovic set point which would have prolonged the afternoon.

Federer finished the job on his second match point with a stinging forehand after 79 minutes.

“Even with how well I’m playing you never expect yourself to win these big matches. It’s been a great week for me,” said the 17-time grand slam champion.

Djokovic has now lost his past two meetings with Federer after he was beaten in a Wimbledon semifinal last month.

“Roger, he was the better player today. I got off to a slow start and could never catch up,” said Djokovic.

“I didn’t think I’d get this far this week after winning in Canada. So this is a great result for me. Hopefully it will point me towards a good US Open,” said the New York defending champion.

Djokovic was playing in his 49th ATP final, his record now standing at 31-18 in finals.

The tournament was the 16th consecutive Masters 1000 tournament that has been won by one of four players – Federer, Djokovic, Nadal or Andy Murray.

Federer will remain atop the ATP rankings through the US Open, adding another three weeks to his all-time total as he begins his record 292nd week in the top spot.