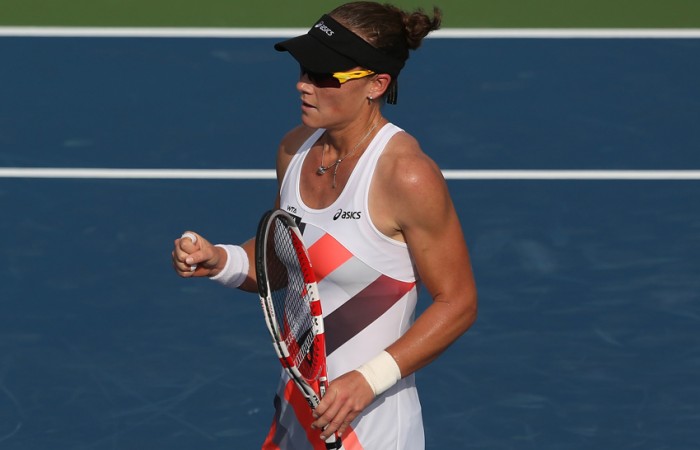 Sam Stosur has scored a confidence-boosting victory at the WTA Cincinnati event, recovering from a significant third-set deficit to beat Anabel Medina Garrigues.

After failing to convert a match-point in the second set tiebreak, Stosur fell behind 4-1 in the final set before roaring back to claim a 6-3 6-7(6) 6-4 win.

It took Stosur more than two-and-a-half hours to finally end the challenge of her pugnacious opponent, a Spaniard ranked No.38 in the world.

“I thought: ‘I can still regroup and close that gap just a little bit,’ Stosur said.

“If you can do that, then you never know what can happen. I got on a roll and managed to squeeze it out.”

The win moves Stosur into the third round, where she will face either Russian Ekaterina Makarova or Anna Tatishvili of Georgia.

The world No.6 took the opening set thanks to the one break of serve, and fought off the first real challenge of the match in the 10th game of the second set where she forced to save two set points.

With the set progressing to a tiebreak, it seemed Stosur was headed for victory when she grabbed the first mini-break and later gained a match point leading 6-5.

But her failure to convert was the sliver of hope Medina Garrigues, who levelled the match on her third set point and then skipped out to a double-break lead in the third.

Despite some uncharacteristically poor serving, the Aussie managed to muster her focus and reel in the Spaniard, scoring just her second win since Wimbledon.

“Myself, and I’m sure a lot of the other players, are still trying to find that timing from being on the grass for so long – on good hard courts with the ball bouncing up, and it’s really quite light through the air,” Stosur said.

“I guess I’ll find out more when I lay down in bed how achey and I sore I am.

“I played some long matches lately and pulled up well. Hopefully this will be no different.”

With world No.1 Victoria Azarenka and the second-ranked Maria Sharapova skipping the event, Stosur has a nice draw and a great opportunity to build further confidence ahead of her US Open title defence in New York beginning 27 August.