Lleyton Hewitt has continued his impressive run of form to reach the second round of the Cincinnati Masters. 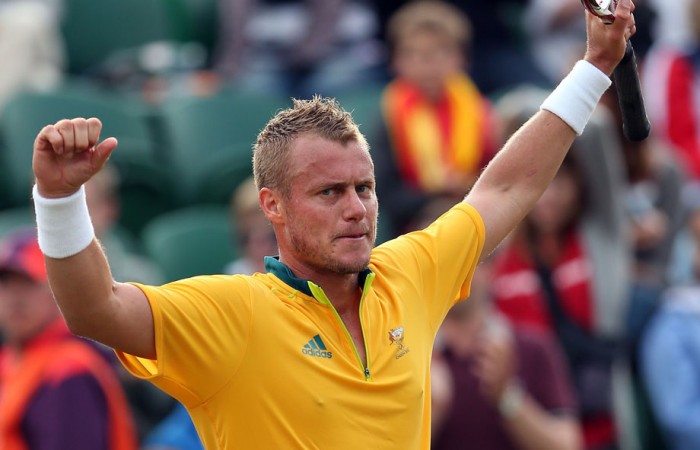 Lleyton Hewitt has continued his impressive run of form to reach the second round of the Cincinnati Masters.

Hewitt upset Wimbledon quarterfinalist Mikhail Youzhny 6-4 6-4 in his opening match of the American hardcourt season after reaching the final on grass at Newport and then pushing Novak Djokovic to three sets at the London Olympics.

Victory advanced Hewitt to a second-round match-up with Serbian Viktor Troicki at a happy hunting ground for the veteran Australian wildcard.

Hewitt, up to 134th in the rankings after falling outside the top 200 following foot surgery in February, is a two-time runner-up and five-time semifinalist in Cincinnati.

Hewitt saved seven of eight break points before serving out the first set and gained another decisive break early in the second before closing out the contest in one hour, 27 minutes.

Old pro Nikolay Davydenko schooled Ukrainian young gun Alexandr Dolgopolov 6-1 6-1 to get off to a rollicking start at the joint ATP-WTA event.

The 31-year-old Russian left Dolgopolov, eight years his junior, wondering what happened to the game which produced a title in Washington eight days ago on pre-US Open hardcourts.

Since beating German Tommy Haas in the final in the American capital, Dolgopolov has lost two matches, winning just four games in the process.

Davydenko, 2008 Cincinnati semifinalist, said he wished he could roll back the years.

“I am playing well but there is no way that I will get younger – it’s too much to ask,” he said.

In the women’s draw, a pair of unseeded Germans advanced into the second round on the day in which world No.13 Ana Ivanovic was forced to withdraw after a foot injury suffered last week in Montreal.

The Serbian former No.1 will hopefully be fit after five days of rest and can begin final preparations for the US Open starting in a fortnight.

“It was really awesome to win both medals at the Olympics,” said the 30-year-old. “I really wanted to win doubles even though everyone reminded me that I had not won singles (yet).

“I just want to keep playing well and doing the best that I can. More slams obviously is what I want to go for.

“I definitely have goals that I want to try to reach.”