Sam Stosur has been eliminated from the WTA Premier event in Montreal, edged in two tiebreakers by ever-dangerous Czech Lucie Safarova. 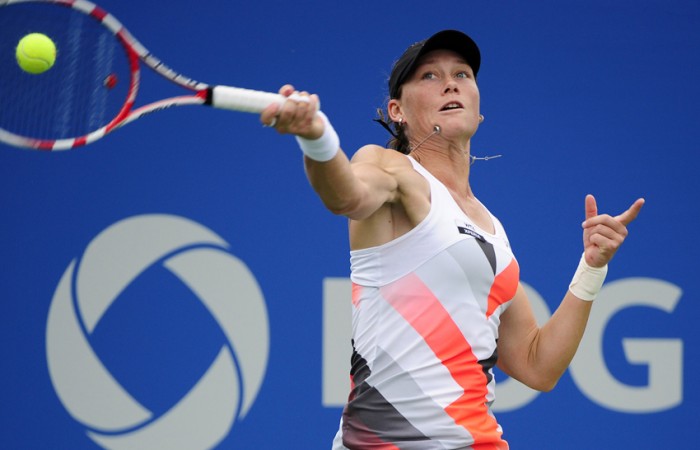 Sam Stosur has been defeated at the Rogers Cup in Montreal, falling in a tense third round match to 16th seed Lucie Safarova.

The fourth seed was unable to match Safarova on serve, with the Czech blasting 11 aces and just one double fault in an exemplary display.

It proved the difference in what turned out to be a highly-competitive and evenly-matched contest.

Despite fighting hard, Stosur was unable to stave off an upset, falling to the left-hander 7-6(9) 7-6(5) after more than two hours on court.

It continues a run of disappointing results for the Australian, who has now dropped five of her past seven tour singles matches.

She will have another week to regain form on American hardcourts at next week’s Cincinnati Masters, before beginning the defense of her US Open title on 27 August.

Stosur also reached the Rogers Cup final in 2011, a year when the tournament was staged in Toronto.

The win over Stosur extends Safarova’s lead in the pair’s head-to-head to 4-2, her first victory over the world No.5 in more than three-and-a-half years.

In the quarterfinals, Safarova will go on to play the winner of the match between No.6 seed Angelique Kerber and Roberta Vinci of Italy.