Stosur steeled for US success

Sam Stosur is happy to be back on North American hardcourts, and hopes to emulate the run the saw her claim her first Grand Slam singles title in New York. 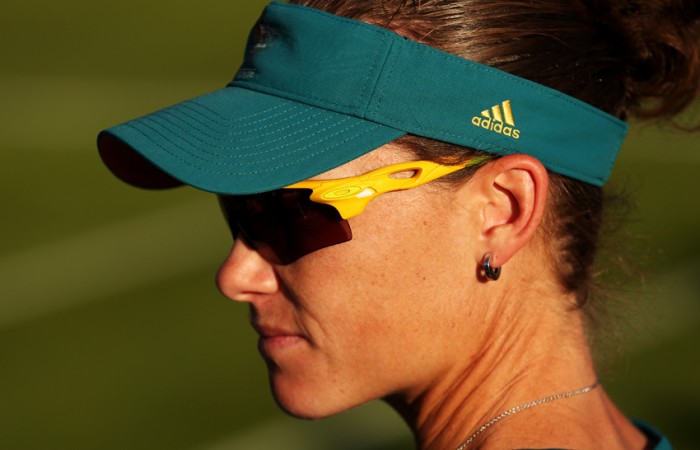 After a self-described tough month in London, Sam Stosur is back on North American hardcourts this week at the Rogers Cup in Montreal, the tournament which last year precipitated a career-best run for the 28-year-old.

After a lean 2011 European swing where she fell early at the French Open and Wimbledon, Stosur enjoyed a confidence-boosting trip to the Rogers Cup final in Toronto – the event rotates each year between Toronto and Montreal – before falling to Serena Williams. Just weeks later, Stosur resoundingly reversed that result in the US Open final, playing the match of her life to defeat the American great in straight sets.

It was all part of a run that saw her go an impressive 14-3 on North American hardcourts that season, capped with the Grand Slam singles title that finally did justice to her enormous talent.

A year later, after early exits at Wimbledon and the Olympic tennis event on grass, Stosur feels she’s back where she belongs.

“I feel real comfortable playing on high-bouncing hardcourts, I feel I move more efficiently and I can really utilise my heavy forehand, something that is neutralised on grass. I have had a tough month in London and look forward to turning my form around leading into the US Open,” she says, speaking from Montreal.

“A high-bouncing hardcourt is very conducive to my style of tennis so from my first hit in practice I feel comfort in my shot-making and weapons.”

This is not something that Stosur’s first opponent in Montreal, Romanian Simona Halep, will be wanting to hear. The Australian already leads their head-to-head 2-0 and has never dropped a set, and will be keen to notch a third win as a springboard to another finals appearance in Canada.

This is a distinct possibility given the good draw she has received. High seeds Victoria Azarenka and Petra Kvitova – each with winning records over Stosur – are in the opposite half of the draw, while Maria Sharapova has withdrawn due to illness. The main threats in her own half come from second seed Agnieszka Radwanska, No.6 Angelique Kerber, and Sara Errani, the eighth seed who thwarted Stosur in this year’s French Open semifinals. The Aussie is a combined 9-2 against this group.

Another notable absentee is Williams. Despite saying in the lead-up to the Montreal event that she would not complain about not having to face Serena, Stosur says that she actually enjoys playing the 14-time Grand Slam champion.

“It is a great challenge to play one of the all-time best players of our sport. I have good results against her,” says Stosur, who also beat Williams on her way to the Roland Garros final in 2010.

“I always look to learn from every loss and use that knowledge in my next match against them. If losing that Toronto final [to Williams] meant I won the US Open [by beating her], I will take that loss any day.”

If Stosur does eventually confront Williams in the upcoming weeks, she’ll have to draw on that philosophy, as Williams has won both of their meetings so far in 2012. One was a 6-1 6-1 drubbing in the Family Circle Cup semifinals in Charleston. And while Stosur struggled through the recent grasscourt season, Williams was in imperious form, backing up her Wimbledon title by utterly blitzing the field during the London 2012 Games.

Although the Olympics did not bring the results Stosur had hoped, the Australian sees her time in London as an extremely valuable experience.

“Having a longer grass season was not the best for my tennis but I loved being at the Olympics. It is very inspirational to watch and be a part of the biggest sporting event in the world,” she says.

“The Olympics has been a good distraction for me to not be so single-mindedly focused on my tennis. I have been following and watching so many other sports that I haven’t really been thinking about defending the US Open.”

Arriving at Flushing Meadows as a defending Grand Slam champion certainly thrusts Stosur into unfamiliar territory. And the expectation and pressure is only heightened by the fact she has a truck-load of points to defend in the next month.

The world No.5 is countering that pressure with a typically measured approach. Playing in Canada serves two positive purposes – it is a return to the structure and routine of typical tour events, and it’s somewhere she feels comfortable, a place in which she says she receives great support and where the people seem “very similar to Aussies”.

She will continue her US Open preparations the following week at the WTA Premier event in Cincinnati.

“Having to defend points is a positive for me as it is a reminder that I have done well here the year before,” Stosur explains.

“[And] I can’t wait to get back to New York City … Walking into Flushing Meadows as defending champion will be very special, something I hope to get to do again after 2012.”

This week in Montreal will be a good indicator of where Stosur’s game is at, and perhaps how likely a repeat of that stellar New York result will be.