Laura Robson and Andy Murray have edged Sam Stosur and Lleyton Hewitt in a final set super-tiebreak after a competitive match on Centre Court. 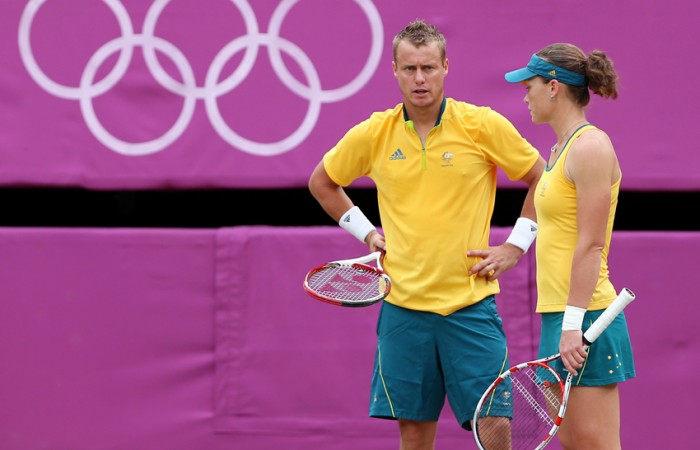 Sam Stosur and Lleyton Hewitt have been eliminated from the Olympic mixed doubles event, losing their quarterfinal to Great Britain’s Laura Robson and Andy Murray.

Played before a patriotic crowd on Wimbledon’s Centre Court, the Brits did their fans proud in a highly competitive match, winning 6-3 3-6 [10-8] to advance to the semifinals.

The pair then returned later in the day to win their semifinal against Germans Sabine Lisicki and Christopher Kas on Court No.1, also winning in a final set match tiebreak.

The Australians had the momentum going into the super tiebreak but were unable to take advantage of it, with Stosur commenting that both Robson and Murray played at a very high level when it mattered most.

“Robson was definitely was playing very well. She was picking my serve and always putting me under pressure,” she said.

“And when you’ve got to serve to Andy [Murray] that’s not a fun prospect either.”

The win for the Brits – and the subsequent semifinal victory – puts Murray into his second gold medal match.

On Sunday he will take on Roger Federer in the men’s singles final before teaming with Robson to face top seeds Victoria Azarenka and Max Mirnyi of Belarus in the mixed decider.

Hewitt enjoyed a great week at SW19, reaching the third round of the men’s singles and pushing Novak Djokovic all the way before succumbing in three sets.

For Stosur, mixed doubles proved a shining light after first round losses in the women’s singles and doubles.

Next on the agenda for both Stosur and Hewitt will be preparing for the US Open, beginning on 27 August.