Sam Stosur and Lleyton Hewitt will aim to keep their medal hopes alive when they tackle Brits Laura Robson and Andy Murray in the Olympic mixed doubles. 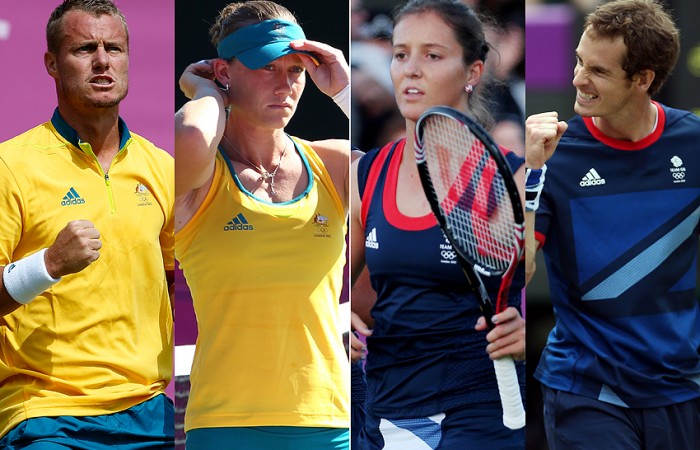 The stage is set for a blockbuster quarterfinal between Australia and Great Britain on Friday, with star quartet Sam Stosur, Lleyton Hewitt, Laura Robson and Andy Murray going into battle in the mixed doubles competition at London 2012.

Both teams were awarded ITF places into the 16-team draw, but wasted no time in proving that this decision was indeed the correct one.

Stosur and Hewitt became the first team through to the quarterfinals on Wednesday after disposing of Polish fourth seeds Agnieszka Radwanska and Marcin Matkowski in straight sets.

The next day, Brits Robson and Murray set up the final eight clash with the Aussies after a tough three-set victory over Czechs Lucie Hradecka and Radek Stepanek.

There will no doubt be plenty of interest in this high-profile mixed match, with the contest scheduled as the last of the day on Wimbledon’s No.1 Court around 6:00 pm London time (3:00 am Melbourne time).

“Lleyton’s known for his singles but he’s an excellent doubles player, he made the final of the mixed here years ago and he’s won [Grand] Slam doubles before,” said Murray after he and Robson ousted Hradecka and Stepanek.

“Sam, before she started to focus on singles, was No.1 doubles player in the world, so they will be very, very tough.”

Stosur has won two Grand Slam mixed doubles titles at the Australian Open in 2005 (with Scott Draper) and at Wimbledon 2008 (with Bob Bryan).

With Murray the only player out of the four still involved in the singles, the competition will be fierce. The winning team will move through to the semifinals, which will guarantee them the chance to compete for a medal.

For more information on television coverage of the London 2012 Olympics, please see our TV Guide.