Lleyton Hewitt has put up an extraordinary fight against Novak Djokovic on Wednesday in the third round at London 2012 before falling in three sets. 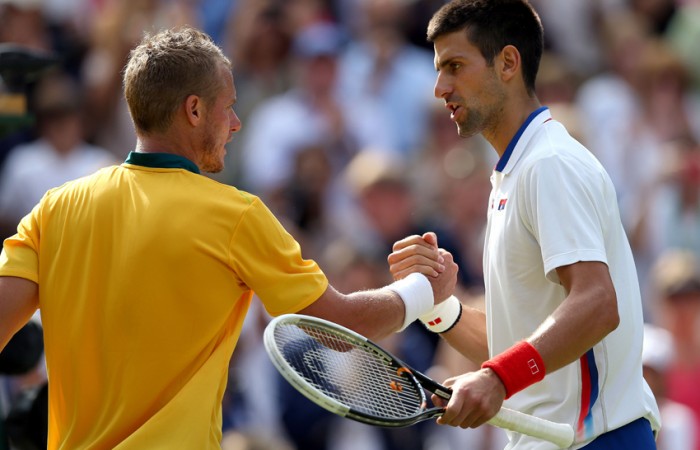 Lleyton Hewitt put up an extraordinary fight against Novak Djokovic in the third round of the men’s singles at London 2012 before falling in three sets.

The Australian took the opening set and looked poised to score a major upset on Centre Court at Wimbledon, until Djokovic’s superior match fitness and back-court power eventually proved too much.

Watched on by mixed doubles teammate Sam Stosur, Hewitt set about proving wrong those that doubted he could match it with the world No.2.

He played a near-faultless first set, smacking eight winners, committing just two unforced errors and winning an astonishing 100 per cent of points when he landed his first serve.

He continued to take it to Djokovic in the second, with the two men locked in a dog-fight that enthralled the Centre Court crowd.

Yet when Djokovic gained his first service break of the match to move ahead 5-3, it appeared the momentum was shifting.

It appeared that way to everyone but Hewitt himself. The South Australian promptly broke back to eventually level at 5-5, just two games away from a monumental upset.

With service breaks coming thick and fast, the Serbian raised his level and broke again, and in the 12th game, made no mistake when the opportunity came to hold serve and capture the second set.

Games went on serve early in the third set, until Djokovic snared breaks in the fourth and sixth games to open up a decisive 5-1 lead.

He served it out in style, pounding a 205km/h first serve – his fastest of the match – on match point to progress to the quarterfinals.

For Hewitt, his Olympic dream is not yet over – he will get the chance to shrug off that disappointment when he teams with Stosur later on Wednesday in the mixed doubles.