Tomic bows out of Olympic singles

Bernard Tomic has gone down to No.15 seed Kei Nishikori in the opening round of Olympic singles action in two tight sets. 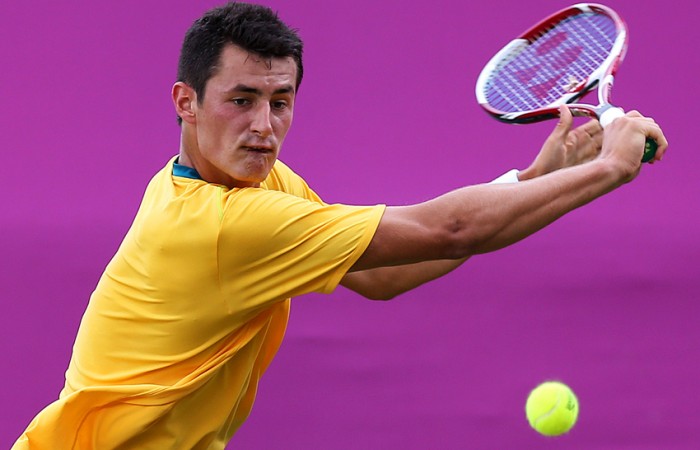 Bernard Tomic has gone down to No.15 seed Kei Nishikori in the opening round of Olympic singles action in two tight sets.

Tomic was unfortunate to draw the Japanese player, currently ranked world No.18 and enjoying one of the best seasons of his career.

Nishikori showed why, smacking 39 winners to just 12 unforced errors on his way to victory in 90 minutes on Court 18.

He also played an attacking game well-suited to Wimbledon’s grasscourts, advancing to the net 23 times. Tomic preferred to remain at the baseline, coming forward on just seven occasions.

It was a high-quality match – Tomic and Nishikori both landed a high percentage of first serves, combined to hit 23 aces to just one double fault, and recorded a collective 66 winners to 27 errors.

Little separated them on the stat sheet as well, with Nishikori winning 83 points to Tomic’s 78.

But it was Nishikori’s greater willingness to attack and put a little more pop on his groundstrokes – he finished with eight more winners than Tomic – that proved the difference.

He will next face the winner of the match between Czech Radek Stepanek and Nikolay Davydenko of Russia.

In a rain-delayed day at the All England Club, only 11 matches were completed. Hewitt’s match against Ukrainian Sergiy Stakovsky has been postponed until Wednesday.

The Aussie veteran’s match will be the first of Day 3 on Court 18, with play to begin at 8.30pm AEST.