Australia’s Sam Stosur has lost in the opening round of the Olympic tennis even in heartbreaking circumstances, falling 3-6 7-5 10-8 to Carla Suarez Navarro. 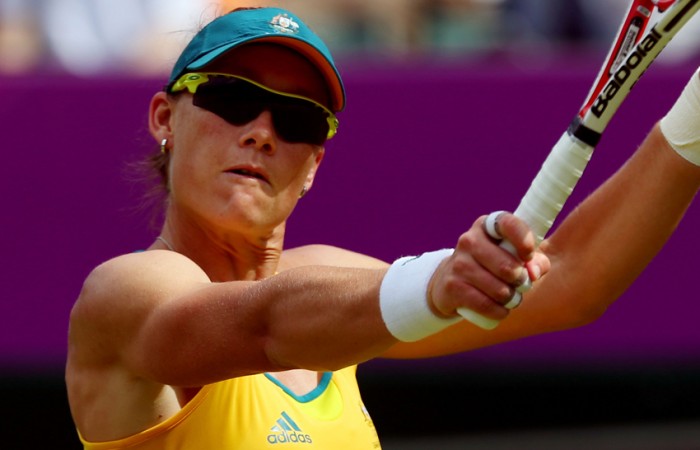 Australia’s Sam Stosur has lost in the opening round of the Olympic tennis even in heartbreaking circumstances, falling 3-6 7-5 10-8 to Carla Suarez Navarro.

It will be a particularly bitter pill to swallow for Stosur, who easily accounted for the Spaniard just one month ago on the very same courts at the 2012 Wimbledon Championships.

After an excellent performance in the opening set, in which she hit a blistering 12 winners to three and won 80 per cent of points behind her first serve, Stosur’s game went south.

She collapsed in a sea of errors, accumulating a whopping tally 45 through the second and third sets. Despite her success when she ventured to net (winning 19 of 24 points) and finishing with 36 winners to Suarez Navarro’s 25, it was not enough to suppress the Spaniard.

Stosur eventually went down after two hours and 38 minutes.

Stosur’s loss also prevented a blockbuster match against Kim Clijsters. The Belgian cruised into the second round with a straight-set victory over Italy’s Roberta Vinci.

However, the Aussie remains alive in the women’s doubles – she will pair with Casey Dellacqua later today to take on No.8 seeds Nuria Llagostera Vives and Maria Jose Martinez Sanchez.