Sam Stosur will face Carla Suarez Navarro in the first round at the Olympics, a re-match of their first round battle at Wimbledon. Kim Clijsters looms next. 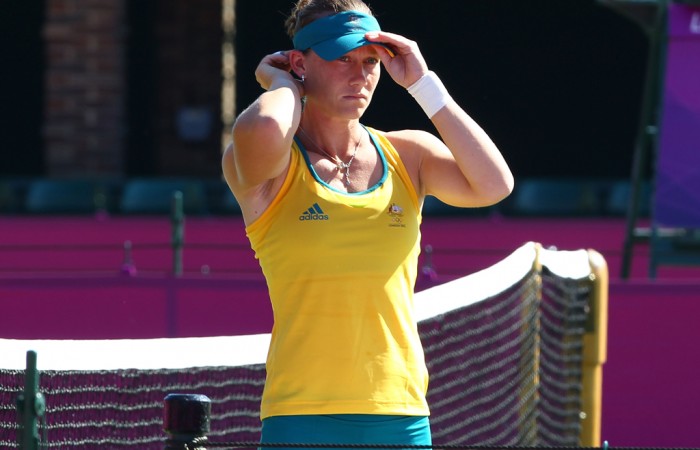 The official draw ceremony for the Olympic tennis event at London 2012 was held at the All England Club on Friday, and in good news for Sam Stosur, the Australian has been dealt a reasonable draw.

Fifth seed Stosur will take on Spaniard Carla Suarez Navarro, a rematch of their first round battle at Wimbledon just a few weeks earlier.

Stosur won that match comfortably, and should she repeat the feat, a likely second round battle against Kim Clijsters looms.

This is not the horror draw that it would have once been, as the Belgian great has endured an injury-ravaged season that has limited her to just five events in 2012. And like Stosur, Clijsters – who currently languishes at world No.36 – is not as comfortable on the grass as her beloved hardcourt.

If Stosur plays to her seeding and reaches the quarterfinals in London, she faces a projected last-eight battle against third seed Maria Sharapova.

In doubles, Stosur will team with Casey Dellacqua to take on Spanish No.8 seeds Nuria Llagostera Vives and Maria Jose Martinez Sanchez.

In other notable singles action, hot gold medal favourite Serena Williams will form half of the blockbuster match of the first round when she takes on former world No.1 Jelena Jankovic.

Caroline Wozniacki and Na Li are the highest seeds and biggest threats in the American’s quarter.

Should the seedings hold, Williams faces a semifinal battle with world No.1 Victoria Azarenka, who heads the draw as the top seed.

The Belarusian begins her Olympic campaign against Romanian Irina-Camelia Begu, with a projected quarterfinal meeting with No.7 seed and recent Wimbledon semifinalist Angelique Kerber of Germany.

In the bottom half of the draw, Sharapova and Petra Kvitova are the favourites to win through to a semifinal meeting.

It’s an extremely strong draw in London, yet the women’s event will be missing Marion Bartoli, Kaia Kanepi, Andrea Petkovic and Alona Bondarenko.

Bartoli’s long-running feud with the French Tennis Federation meant she had not partaken in Fed Cup play, necessary for qualification for the Olympic Games.

Meanwhile, Estonian Kanepi, German Petkovic and Ukrainian Bondarenko will not make the trip to London due to ongoing injuries.

The Olympic tennis event at London 2012 begins on Saturday 28 July. For more information on television coverage of the Games, visit our TV Guide.