Aussies Bernard Tomic and Lleyton Hewitt have been handed manageable draws in the Olympic tennis event after the official draw ceremony on Friday. 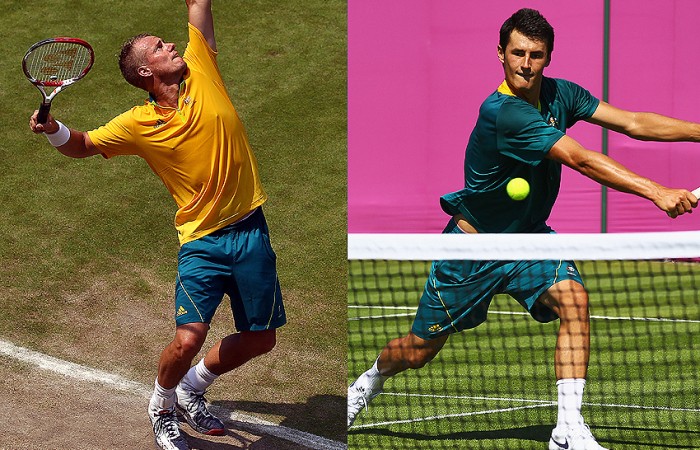 Australia’s male contingent of Bernard Tomic and Lleyton Hewitt have been handed manageable draws in the Olympic tennis event following the completion of the official draw ceremony at the All England Club on Friday.

It no doubt comes as a relief to Hewitt, who has developed an unfortunate history of facing the game’s highest-ranked players in the early rounds of the biggest events.

The 31-year-old, who qualified for the singles draw in London courtesy of an ITF-awarded place, kicks off his Olympic campaign against Ukrainian Sergiy Stakhovsky, also a wildcard into the singles event.

If victorious, Hewitt would not face a top player until at least the third round – No.13 seed Marin Cilic of Croatia would be his likely second-round opponent before a projected meeting with second seed Novak Djokovic in the final 16.

Despite Tomic drawing No.15 seed Kei Nishikori in his opening match, the young Aussie has landed in arguably the weakest quarter of the draw.

Should he defeat the Japanese – not out of the question given Nishikori’s underwhelming grasscourt resume – Tomic would face a second round battle against either Nikolay Davydenko or Radek Stepanek.

David Ferrer and Juan Martin del Potro are the highest seeds in his quarter, both of whom have far less imposing records at Wimbledon compared with other Grand Slam events.

Roger Federer, Novak Djokovic and Andy Murray – the odds-on favourites to take up the three places on the men’s medal dais at tournament’s end – have been dealt vastly different draws.

Top seed and reigning Wimbledon champion Federer faces Colombian Alejandro Falla in his first round match. Although Falla took Federer to five sets in the opening round at Wimbledon in 2010, Federer will no doubt be keen to quickly snuff out any chance of another struggle.

The first seed the Swiss is projected to meet is 14th seed Fernando Verdasco, with a potential quarterfinal battle with Serbian No.7 seed Janko Tipsarevic or 10th seed John Isner of the United States.

Djokovic will tackle Italian Fabio Fognini in his opener – a player with a mediocre 4-4 career record at the All England Club – with fifth seed Jo-Wilfried Tsonga looming as a likely threat in the quarters.

Third seed Murray has landed in same half of the draw as second-seeded Djokovic, but will have his work cut out for him to win through to that projected semifinal encounter.

The Brit has drawn Swiss Stanislas Wawrinka, formerly ranked inside the top 10, as his first round opponent, while seasoned grasscourters Richard Gasquet and Marcos Baghdatis are potential third round foes.

No.6 seed Tomas Berdych is seeded to meet Murray in the final eight.

While it may be the strongest field at the Olympic tennis event in history, there are several noticeable absentees.

The biggest name not to be present in London is world No.3 Rafael Nadal, who withdraw prior to the event citing a knee injury.

American Mardy Fish, currently ranked 13th and who won singles silver at Athens in 2004, decided not to participate in the Olympics. With the memories of his loss in Athens after leading two-sets-to-one still painful, Fish will instead focus on North American hardcourts events in the lead-up to the US Open.

Top 20 stars Alexandr Dolgopolov and Gael Monfils will also not contest the Olympics – Frenchman Monfils is suffering from injury while Ukrainian Dolgopolov did not fulfil the Davis Cup commitments required for Olympic qualification.

The Olympic tennis event at London 2012 begins on Saturday 28 July. For more information on television coverage of the Games, visit our TV Guide.