Anastasia Rodionova has always enjoyed team events, a good sign ahead of teaming with Jarmila Gajdosova in doubles for Australia at the London Olympics. 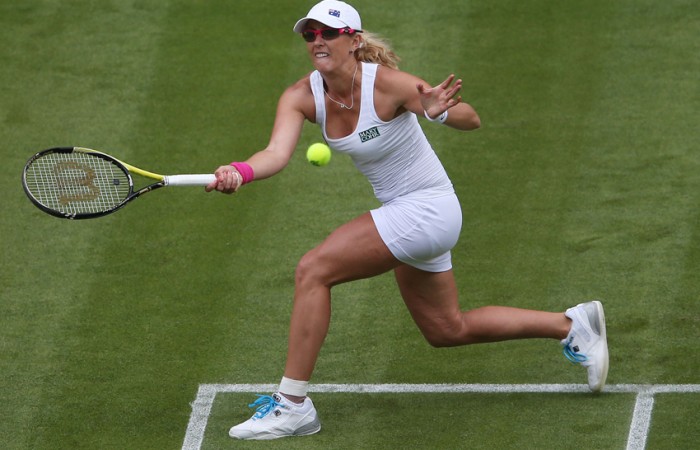 She has played World Team Tennis (WTT) for seven years – representing the Washington Kastles for the past four seasons – and quickly jumped at the chance to play for her adopted country in Fed Cup, winning on debut for Australia in 2010 against the Ukraine. Playing for the Australian team at the 2010 Commonwealth Games also brought great success, with Rodionova scooping gold in both singles and doubles.

Now, she has been selected to represent the green-and-gold in her very first Olympic Games. Rodionova couldn’t be more pleased.

“I’m really excited to be in the Australian Olympic team. Since I was a kid I have watched the Olympic games on TV and dreamed of being there one day. It’s a dream come true,” she says.

Rodionova was born in Tambov, Russia, but relocated to Melbourne in 2005 and was granted citizenship in December 2009. Rodionova says she loves the Victorian capital, which is where she also trains – dividing her time between Melbourne Park and Albert Park Reserve – when not traversing the globe on tour.

“Melbourne is a very multicultural city.  It has been an easy transition for me and I love the atmosphere,” she explains.

Yet following her first round defeat at Wimbledon to top seed Maria Sharapova, Rodionova did not return home to Australia like many of her Olympic teammates, including Sam Stosur and Casey Dellacqua. Instead, after spending some time with her parents, the world No.138 headed to the United States to play WTT for the Kastles.

It’s an approach she hopes will pay dividends leading into the Olympic tennis event.

“I get to play a lot of matches here, singles, doubles and mixed doubles, in a short period of time. This unique format teaches you to be focused for every point in each match,” she says.

Following her WTT appearances, Rodionova has arrived in London to continue her Olympic preparations at the All England Club alongside the rest of her Australian teammates. This includes Jarmila Gajdosova, her partner in the women’s doubles event.

Gajdosova also gained Australian citizenship in late 2009, and together the pair are well positioned for a good run representing their adopted homeland when the tennis competition begins at Wimbledon this Saturday. They combined recently at the French Open and made a statement in reaching the quarterfinals.

With Rodionova and Gajdosova both ranked in the doubles top 40, Rodionova has high hopes for the duo ahead of the Games.

“I think Jarka and I have a pretty good shot for a medal … I think we complement each other very well on the court,” she says.

How they perform remains to be seen, but one thing’s for certain – Rodionova’s achievement in representing her country and being a part of the team atmosphere she loves, both in doubles and the Olympics as a whole, has done wonders for her motivation.

“My first aim was to play at the Olympics,” she says, “but once you make it you want to win it.”