Although 2012 has been a lean season by her standards, donning the green-and-gold at the London Olympics could be what turns it around for Jarmila Gajdosova. 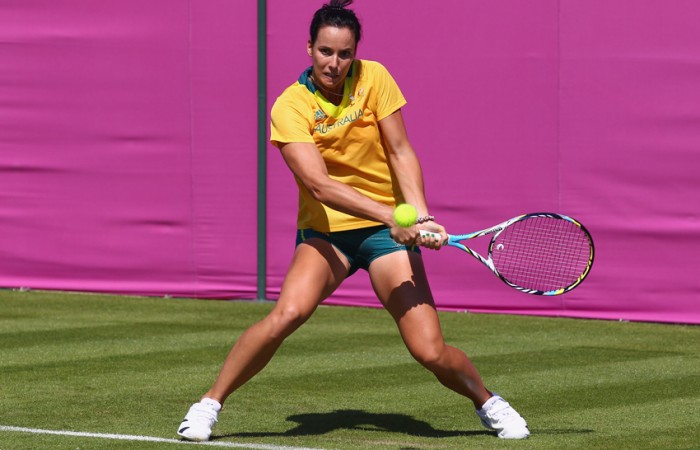 The year 2012 hasn’t been all that kind to Jarmila Gajdosova. She’s fallen in the first round at 10 tournaments, is a lean 9-16 for the year and has slipped to world No.99 after beginning the season inside the top 40.

Part of the problem has been a series of niggling injuries that have disrupted her momentum. Ankle and wrist ailments have hampered her progress, the latter responsible for her withdrawal from all grasscourt events in the lead-up to Wimbledon.

Yet if anything is likely to turn her fortunes around, it’s representing Australia.

The naturalised Australian citizen, who was born in Slovakia but relocated to Australia after falling in love with the country as a 14-year-old, enjoyed a similar boost when clad in the green-and-gold for a Fed Cup tie in April against Germany. Coming into the tie in Stuttgart having lost her past two matches, she spectacularly reversed the tide against then-world No.16 Julia Goerges with a straight sets triumph.

It was a win which helped her country to a famous victory over the highly-fancied German team, vaulting Australia back into World Group in the process.

Gajdosova will have another chance to represent her country and recapture that winning feeling at the London 2012 Olympics, and has been training hard to ensure her body withstands the rigours of competition at the All England Club.

“I’m very excited. I’m sure it will be an experience that I will never forget. I hope to meet some of the other athletes as well,” she says.

“I have been doing a lot of physical training over the past month. I have had a few nagging injuries, so my matches have been limited. I would say I have been doing gym six days a week and (have been) on court four days (per week) to protect my injuries.”

Although the Aussie No.2’s ranking has fallen to the point where she found herself outside the cut-off for entry into the singles competition, Gajdosova will partner Anastasia Rodionova – another naturalised Australian – in the doubles event.

The pair teamed with great success recently at Roland Garros, where as the 14th seeds, they won through to the quarterfinals.

“She is an excellent doubles player, and her experience has helped me a lot,” Gajdosova says of Rodionova.

Gajdosova and Rodionova join the pairing of Sam Stosur and Casey Dellacqua as Aussie representatives in the women’s doubles draw at the Olympic tennis event. While the latter combination may be a higher-profile pair with greater success in the tandem form of the game, Gajdosova and Rodionova actually beat Dellacqua (and her Russian partner Alexandra Panova) as part of their aforementioned run at the French Open.

Gajdosova will certainly benefit from Rodionova’s experience when she takes to the lawns for her first match at the All England Club – it will be her first ever appearance at an Olympic Games.

Not yet sure what to expect from the big occasion, Gajdosova is keeping her approach to the event nice and simple.

“Of course I would love to medal, but my main aim is to represent Australia well,” she says.

“It will be an amazing experience.”