Lleyton Hewitt advanced to his first ATP semifinal since June 2010, downing Dudi Sela 6-4 6-3 on Thursday at the Hall of Fame Tennis Championships. 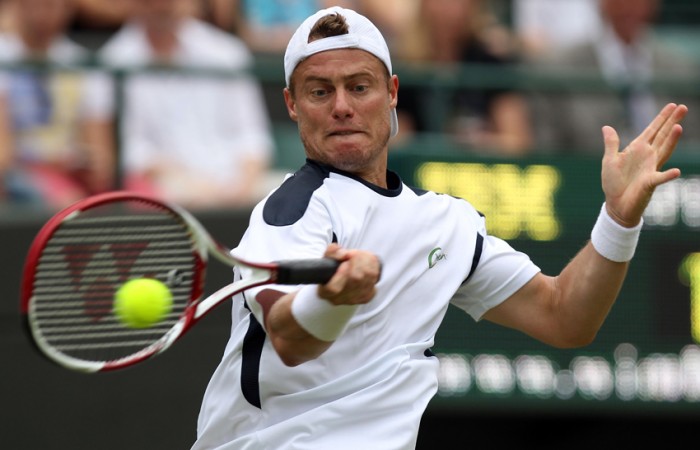 Lleyton Hewitt advanced to his first ATP semifinal since June 2010 on Thursday, downing Dudi Sela 6-4 6-3 to reach the last four at the Hall of Fame Tennis Championships.

The Rhode Island event is the the last opportunity for grass-court practice ahead of the Games and Hewitt, on another comeback trail after toe surgery, has made good use of the event.

He will now face American Rajeev Ram, who upset second seed Kei Nishikori 7-6(6) 6-3 in their quarterfinal.

Ram is ranked 118th in the world, but will draw confidence from the fact he won his first ATP title two years ago on the Newport grass.

Victory there would mean Hewitt’s first ATP tournament win since his 28th tour-level title at the 2010 Gerry Weber Open in Halle, when he defeated Roger Federer in the final.

The 31-year old, ranked No.1 for 75 consecutive weeks from 2001-03, has undergone five surgeries in the past four years and entered the week ranked at a career-low of 233.

The wildcard started well against Sela, breaking in the first game en route to a 5-2 lead.

In the next two games, Sela broke back and held serve, closing it to 5-4. Hewitt finished the first set in 42 minutes, winning the final point when Sela hit a service return long.

During the eighth and ninth games of the first set, a cloud of dust rolled into the area, casting a slight cloud over the practice courts, stands and part of centre court.

In the first game of the second set, Hewitt broke again, hitting a backhand winner down the line on the final point.

With the set tied 3-all, Sela doubled-faulted four times in the seventh game, including the final point to give Hewitt a 4-3 edge.

He closed out the next game with an ace and the match ended when Sela hit a forehand return into the net.

In other results, wildcard Ryan Harrison beat fellow American Jesse Levine 6-3 6-4 to advance to the quarterfinals.

“He didn’t serve many aces, whereas last time I played him he served nearly 30,” Becker said.

“His serve wasn’t as effective today. I made him play a lot on his second serve and used my chances.”