Being Friday the 13th, a day associated with bad luck by superstitious types, we take a look at 10 of the best and wackiest player superstitions.

Friday the 13th is upon us, the day associated with all things bad luck. This won’t come as good news to our favourite tennis players, who more so than most other athletes are a mighty superstitious bunch and will go to extreme lengths to make sure their environment is conducive to success.

Whether these rituals actually bring luck, or simply work to bring a level of comfort and control, remains to be seen. Yet whatever purpose they ultimately serve, there’s no doubting they’re entertaining for us fans. Here’s 10 of the best – and increasingly wackiest – player superstitions.

10. Serena Williams – serving rituals
It’s all about rhythm when it comes to a good serve, and no-one knows that better than Serena Williams, the best server in the history of women’s tennis. Helping Williams achieve that rhythm is her preparation at the baseline – she bounces the ball five times before her first serve, and twice before her second. Not convinced it works? Serena used this approach in the video below, slamming 20 aces against Sam Stosur in the fourth round at Miami in 2012. More recently, she set a women’s record of a 102 total aces on her way to the title at Wimbledon.

9. Conchita Martinez – using the same ball
Williams is not the only player to have rituals surrounding her use of tennis balls. Like Richard Gasquet and Goran Ivanisevic, Spaniard Conchita Martinez was a player who firmly believed that using the same ball that won her the previous point would bring good luck. She would regularly signal to ball kids to return the same ball to her – even if it had wound up at the other end of the court and would take time to make its way back. It was a superstition that took up plenty of time and could occasionally infuriate players, as the video below demonstrates.

8. Andy Murray – Twitter abstinence
The world No.4, who currently has almost one million followers on Twitter, found that his on-court success increased in parallel with his decision to step away from the social medium following his 2011 US Open semifinal loss to Rafael Nadal. “I just stopped doing it and I’m not missing it to be honest, it was fun for a while but I just stopped and surprisingly I haven’t lost a match since I stopped tweeting,” Murray explained to Sky Sports. “Tennis players and all sportsmen are pretty superstitious, so I blame my US Open loss on tweeting!” The move proved a perceptive one – during his non-tweeting period from 11 September 2011 to 18 April 2012, Murray’s win-loss record was 35-6, including 17 straight following the 2011 US Open.

7. Maria Sharapova – avoiding the lines
It’s hard to imagine how this tick can develop in tennis players, given how many lines there are and how much time they spend on court in both practice and matches. But players such as John McEnroe, Martina Hingis and, more recently, Maria Sharapova, have felt it important to follow this ritual. And you can’t argue with their approach – between them they have won 16 Grand Slam singles titles. In order to prevent herself stepping on the lines, Sharapova has developed a idiosyncratically rigid, stuttering walk around the court, on show between points in the video highlights below.

6. Sam Stosur – cutting out superstitions
For Aussie Sam Stosur, observing multiple superstitions simply became exhausting. So she cut them out completely. “I stopped being superstitious in 2009 after the [French Open],” she explained. “For the whole tournament [she reached the semifinals], I wore the same dress, the same socks, the same hat – it drove me crazy. Every night, I had to put it all in the wash. Everything had to be the same, even my hair. It was enough to drive you around the bend, so I stopped and now I don’t have any superstitions.”

5. Dominika Cibulkova – ball sniffing
Some players like to take a certain number of balls before they serve. Others like to receive them from a particular corner of the court. Yet Slovakian Dominika Cibulkova goes one step further, smelling the balls as she receives them. At the 2012 French Open where she reached the quarterfinals before falling to Sam Stosur, Cibulkova explained why: “I really like the smell of the balls, of the new balls … I was just smelling the balls all the time. I do the same things. Yeah. I don’t need to do it, but it’s just my habit, what I do on the court when I have new balls. I just smell them. It’s maybe also for the luck, and I do it all my life, so it’s just, you know, something, what I do on the court.”

4. Venus Williams and Novak Djokovic – canine companions
A typical player entourage might feature a coach, trainer, family members and a partner. For Venus Williams and Novak Djokovic, theirs also includes a dog. And the two tennis stars are quite dependent on their furry friends. Venus lamented the absence of her dog Bobby during Wimbledon in 2001, telling the Telegraph: “If Bobby were here, he’d be a joy every day. He helps me warm up on the court. He’s quite noisy and makes me feel good. He’s a feel-good dog. I didn’t even bring a picture of him.” Ten years later at the same tournament, Djokovic was even more distraught as his poodle Pierre – who accompanied him throughout the 2011 European claycourt season – was denied entry into the All England Club. Although both players won The Championships that year, their joy when reunited with their pooches is obvious. 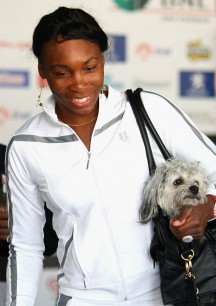 3. Andre Agassi – underwear
Andre Agassi revealed in his autobiography Open that at Roland Garros in 1999, he’d forgotten to pack underwear for his first-round match. He was forced to play without it, but when he won the match, he decided to go commando for the rest of the event. It was a move that paid off – he went on to win the title, capturing his first ever French Open and completing a career Grand Slam in the process. Agassi is not the only player to have clothing-related superstitions – Serena Williams reportedly plays all Grand Slam events in one pair of socks, while Jelena Dokic and Heather Watson wear the same dress during majors. All washed of course!

2. Rafael Nadal – water bottles
One of the more famous, and unusual, superstitions in the game is Rafael Nadal’s placement of his water bottles by his chair. The Spaniard painstakingly arranges his pair of bottles – one chilled, one at room temperature – with the labels facing in exactly the same direction. Nobody else can touch them, as the first video demonstrates, and it’s not a superstition that’s restricted to changes of ends, as revealed in the second video.


1. Goran Ivanisevic – Wimbledon superstitions
The most famous of all for wacky superstitions was Croatia’s Goran Ivanisevic. Having lost in the Wimbledon final in 1992, 1994 and 1998, Ivanisevic arrived at The Championships in 2001 as a wildcard and observed a plethora of superstitions on his path to one of the more unlikely title runs in Grand Slam history. Ivanisevic would begin each day by watching the Teletubbies, and every night ate at the same table of a restaurant in SW19, each time having fish soup, lamb with chips and ice cream with chocolate sauce. Reflecting on his rituals in an interview with the ATP Champions Tour, he said: “[It was] same breakfast, same time packing the bag, same parking space at Wimbledon, same shower … don’t step on the lines, same ball, bloody hell [laughing].” When asked if he realised these rituals never work, he replied: “I didn’t. Because it worked. I won Wimbledon [laughing].” The Croat can be seen below asking a ball boy to return a ball he’d used to deliver a winning serve during his five-set final victory over Aussie Pat Rafter.