Murray will win a Slam – Federer

Andy Murray digests a heart-breaking loss to an All-time great at Wimbledon. 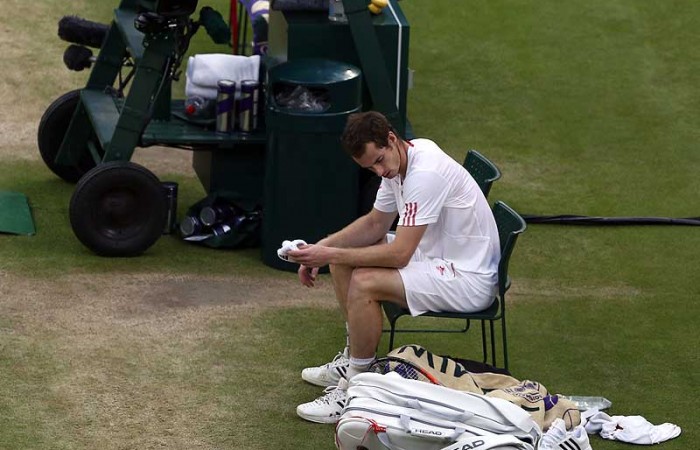 Battered, beaten and bruised. Inside and out.

That was Andy Murray following a moment of pure sporting torment, a soul-crushing 4-6 7-5 6-3 6-4 Wimbledon final loss to Roger Federer.

Thank god the Scot has coach Ivan Lendl in his corner.

Only words of comfort from a player that also lost his opening four grand slam finals are any chance of getting through to Murray in the coming weeks.

Lendl ended up with eight major titles to his name by the end of his career.

With peers like Rafael Nadal and Novak Djokovic not to mention the evergreen Federer, Murray will happily settle for one anywhere let alone ending the nation’s 76-year wait at Wimbledon.

His conqueror at SW19 said that maiden major title can’t be far away for the great British hope.

“I really do believe deep down in me he will win grand slams, not just one,” Federer said.

“Things just didn’t quite turn out for him in the finals that he hoped for.

“But today I’m sure he got another step closer to a grand slam title.”

The last place Murray must feel like returning in three weeks’ time is the All England Club but he will do so for the Olympics.

Not he plans on picking up a racquet next week.

“Until my mind is right, there’s no point in going on the court until I’m ready to go out there and learn and work hard and do the right things in the gym and in practice because there’s just no point,” he said.

“I’ll wait and see how my body recovers after the next few days.

“I fell a lot of times this tournament. I got a lot of bruises all over my body.”

In a game that typified the sustained excellence of Federer’s ball striking in the final two sets, Murray tumbled three times trying to retrieve balls from the Swiss master.

With another grand slam opportunity gone and a wave of disappointment across the UK, Murray called for perspective.

“I lost to a guy that’s now won this tournament seven times and is No.1 in the world,” he said.

“We’re talking about one of the greatest athletes of all time here.

“Got to put it in context a little bit.”

However the final was another reason for the British to hold onto their aversion to change.

After all, look what it has done for Wimbledon contenders Tim Henman and Murray in the past decade.

First they switched the type of grass for the 2002 edition which slowed down the court and neutralised Tim Henman’s serve and volley game.

Next up was putting a roof on centre court for the 2009 tournament.

That looked like an inspired way of combating the rain until the roof was closed with the final poised at one set each.

Without the elements to hinder his high-risk brand of play, Federer blazed his way to victory to make locals yearn for the good old days.

The legend of 1936 champion Fred Perry lives on.