Murray to meet Federer in final

Andy Murray has sparked hysteria in Great Britain after trumping Jo-Wilfried Tsonga to set up a dream Wimbledon final with Roger Federer. 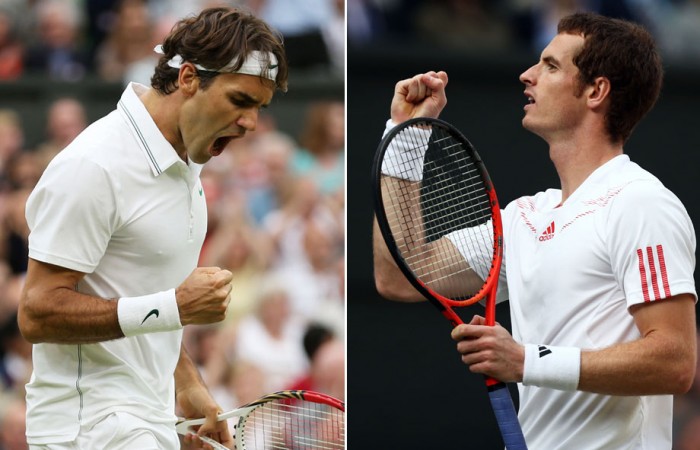 Andy Murray has sparked hysteria in Great Britain after trumping Jo-Wilfried Tsonga to set up a dream Wimbledon final with Roger Federer.

Federer turned in a virtuoso performance to defeat world No.1 and defending champion Novak Djokovic 6-3 3-6 6-4 6-3 and reach an unprecedented eighth Wimbledon decider before a teary-eyed Murray aced fifth seed Tsonga 6-3 6-4 3-6 7-5 to become Britain’s first men’s finalist at the All England Club since Bunny Austin in 1938.

Three times a Grand Slam runner-up, the 25-year-old Scot now has the chance on Sunday to finally break world sport’s most infamous drought.

No British man has won a Grand Slam singles title since Fred Perry in 1936.

As Murraymania sweeps the country, a pair of prized tickets to the historic match are reportedly fetching up to 45,000 pounds ($A68,000).

But to reach his holy grail, Murray must deny the mighty Federer a record-equalling seventh crown at the spiritual home of tennis, a feat that would also propel the Swiss marvel back to world No.1 – a month shy of his 31st birthday.

Murray has already endured the pain of losing Australian Open and US Open finals to Federer – plus a second decider at Melbourne Park to Djokovic – but can at least draw on a favourable 8-7 winning record overall against the 16-time major winner.

Such a scenario would also enable Federer to draw level with Sampras’s record of 286 total weeks atop the rankings and elevate the Swiss wonder to the pantheon of greats in any sporting endeavour. “Obviously I’m ecstatic. I’m so happy,” Federer said.

“Of course it feels great to be in the final again. Obviously there’s a lot on the line for me, but I’m excited and that’s what I play for.

Friday’s blockbuster showdown between Federer and Djokovic was the superstar pair’s 11th at a Grand Slam – more than any two men in history – and first-ever on grass.

And playing under the retractable roof, the finest indoor player on the planet thrived early.

Playing with controlled aggression, he took the opening set in just 24 minutes after claiming the sole break in the sixth game.

Djokovic hit back hard in the second set, losing only three points on serve, and breaking Federer in the second game to have the semifinal evenly poised after 54 minutes.

In the best game of the match, a 10-minute thriller, Federer missed two break points for a 4-2 advantage in the third set as Djokovic held firm under a barrage of heavy shot-making from the third seed.

But the relentless Swiss eventually got his reward when he blazed a backhand crosscourt winner, then struck a delightful forehand to bring up two set points.

Advancing to the net at the first opportunity, Federer only needed the one to take command with a well-executed overhead that secured a two-sets-to-one lead.

In full flight now, Federer grabbed the decisive break in the second game of the fourth set to roar ahead 3-0.

After blowing four match points in successive heartbreaking US Open semifinal losses to the Serb, Federer this time held his nerve to prevail this time after two hours and 19 minutes.

It will also be Federer’s record-extending 24th Grand Slam final appearance as he strives to land his first major since the 2010 Australian Open.

The Scot himself had lost three previous times at the penultimate stage and he must have feared further semifinal suffering when Tsonga stormed back from two sets to love down.

In also making the semifinals last year, the French party pooper became the first man in history to overhaul Federer from two sets behind.

But, to Britain’s delight, lightning didn’t strike twice as Murray progressed after two hours and 47 minutes of tension and drama with a blistering forehand return winner to break Tsonga’s heart.

“It was such a close match. The last two sets, both of us had chances. I just managed to hang tough and thankfully get through.”