It's only across the English Channel, but the pressures of Paris are a world away for Jo-Wilfried Tsonga as he looks to crush British Wimbledon hopes on Friday night. 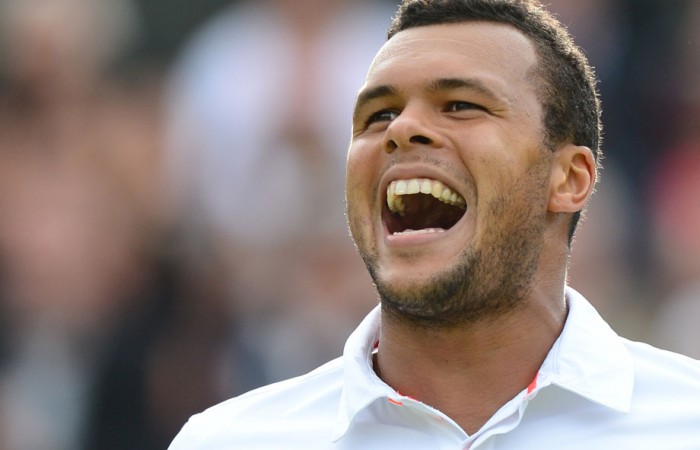 It’s only across the English Channel, but the pressures of Paris are a world away for Jo-Wilfried Tsonga as he looks to crush British Wimbledon hopes on Friday night.

A month after causing a national stir back home after claiming no Frenchman had the mental mettle to reign at Roland Garros, Tsonga is revelling in his role reversal in London.

Tsonga takes on Andy Murray in the Wimbledon semifinals and says he’s happy for the Scot to carry the heavy burden of expectations from a country desperate to have a men’s finalist at the All England Club for the first time since 1938.

“It’s really difficult because every eyes are on him and it’s tough for him,” Tsonga said.

Tsonga also reached the semifinals last year, falling to Novak Djokovic, but feels better equipped to go one step further this time around.

“For me last year was already something huge, to reach the semis,” he said.

“This year it’s going to be a bit different. I’m a bit more favourite in the tournament. I’m seed No.5.

“I take it like a second chance … so I will go on court and I will try to take my chance.”

Trailing Murray 5-1 in their career series, Tsonga takes his underdog status as a challenge.

“Andy’s one of the players I don’t like to play because he’s returning really well and he can play some really good passing shot,” he said.

“He’s really quick. He’s all the time on the ball, so is tough for me.

“But I beat him once and last time we played together on grass, I had a match point and it was really close. Last year in final in Queen’s.

“That’s all right. All the year I’m outside,” Tsonga said.

“Sometimes I play against a player who have lot of support and I win.

“I remember at US Open I play against [Mardy] Fish in a tight match. Was not easy, but I won it.

“It’s of course an advantage to play at home, but it’s still tennis and you never know what happens on court.”

Murray, a three-time Grand Slam runner-up and preparing for his 10th major semifinal, says it’s impossible not to feel the pressure as he tries once more to break his duck.

But the 25-year-old world No.4 is drawing inspiration from American basketball star LeBron James finally winning the NBA championship with Miami Heat this year.

“There were a lot of people who said LeBron would never win,” Murray said.

“That he never played his best in finals and that in the fourth quarter of games, he never stepped up.

“Sometimes it takes some guys a bit longer than others. I’ve been close a lot of times and not quite made it.

“I have to keep putting myself in the position and hopefully it will click.”