Serena to play Radwanska in final

Powered by the most destructive serve in women's tennis and driven by her first-round French Open loss, Serena Williams has rebounded to reach her seventh Wimbledon final. 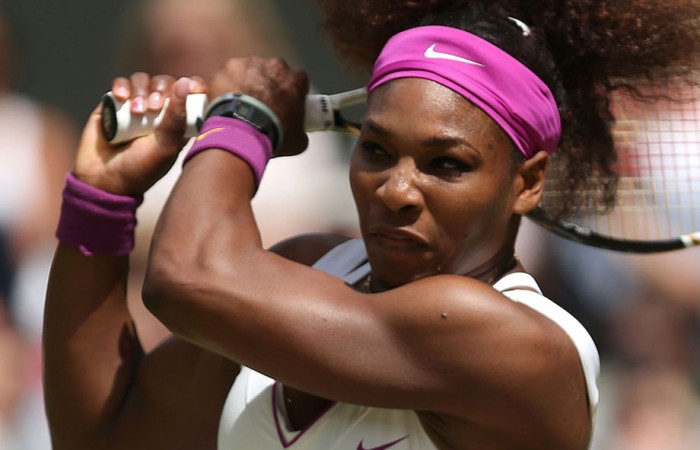 Powered by the most destructive serve in women’s tennis and driven by her first-round French Open loss, Serena Williams has rebounded to reach her seventh Wimbledon final.

The four-times champion broke her own Wimbledon ace record with 24 unreturned bullets to blow past world No.2 Victoria Azarenka 6-3 7-6(6) in one hour and 36 minutes.

Radwanska is Poland’s first Grand Slam finalist in 73 years – but the world No.3 will be long odds trying to become her country’s maiden major winner.

Williams’s mammoth ace tally eclipsed the 23 she set against Zheng Jie in the third round and also left the 30-year-old just four shy of matching her tournament record 89 amassed in winning her fourth title at the All England Club in 2010.

But it wasn’t only service grunt from Williams.

The former world No.1 achieved the decisive first service break with a brilliant running backhand pass to forge ahead 5-3 and was untroubled in closing out the opening set in 33 minutes.

Intent on a quick kill, Williams let out a huge roar after nailing a forehand return winner to claim another break for a 2-1 lead in the second set.

But from 3-1 down, Azarenka briefly threatened a fightback, the Australian Open champion winning three successive games to nudge ahead 4-3 before forcing a tiebreaker.

Azarenka stayed with Williams until 6-6 in the breaker before netting a backhand and watching on helplessly as the 13-time Grand Slam champion thundered down her record-breaking 24th ace on match point.

Williams leads Radwanska 2-0 head to head, but the two haven’t clashed since 2008.

A big underdog she may be, but Radwanska has the chance to complete a rare double at the All England Club after winning the junior girls’ title in 2005.

The 23-year-old can also replace Maria Sharapova as world No.1 next Monday with an upset final triumph.

“There is one match to go so I’m really going to try my best.”

With 45 victories in 2012, Kerber was the most prolific winner on the WTA Tour this year.

But the 24-year-old eighth seed was simply unable to break Radwanska’s back-court resilience.

Radwanska trailed 3-1 early, but reeled off five straight games to take the first set in 29 minutes.

She claimed another break early in the second set and held firm to serve out the match after one hour and 10 minutes.

“I had a tough quarter-final and it was good to have a day off and rest because it’s always tough against Angie,” Radwanska said.

“We both were a bit nervous at the beginning, of course.

“You really want to try your best but sometimes you want it too much and your hands are shaking about.

“But after that I concentrated on every point.”

No Pole – man or woman – has ever won a Grand Slam singles crown, with Jadwiga Jedrzejowska losing the ladies Wimbledon and US finals in 1937 and the French Open decider in 1939.