Australian legend Rod Laver on Thursday proclaimed Roger Federer as the greatest player of all time, but with Rafael Nadal not far behind. 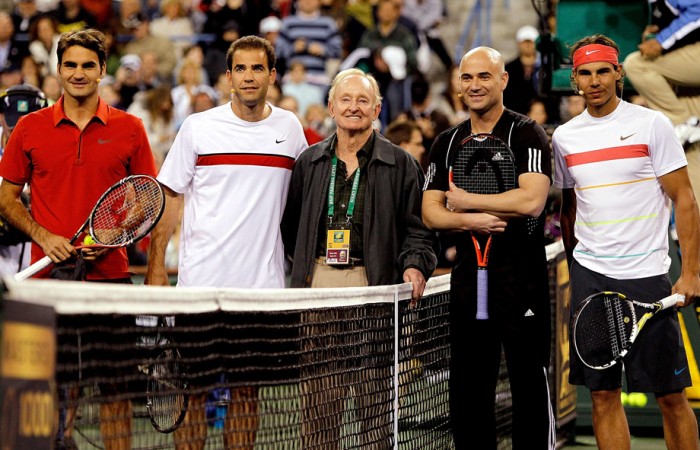 Australian legend Rod Laver on Thursday proclaimed Roger Federer as the greatest player of all time, but with Rafael Nadal not far behind.

“Roger Federer certainly is my claim to be the best of all time if there is such a thing,” said the 73-year-old Australian.

“Roger’s got all the shots, his anticipation is unbelievable, his timing off the groundstrokes with his shots, his single-handed backhand is one of the best there is.

“But at the same time, I look at Rafael Nadal and what he’s done to win seven French Open titles and Wimbledon.

“Being able to play with somewhat of a suspect knee, his way of motoring around the court and tracking shots down is quite uncanny.

“They’re very close. Are they great champions and do they have equal abilities? I’d say ‘yes’, they’re pretty much equal.”

Meanwhile, four-time Wimbledon champion Laver, the last man to complete a calendar grand slam in 1969, has told Andy Murray that he must be more aggressive if he wants to end Britain’s 76-year wait for a male grand slam champion.

“He plays a safe game a little bit too long,” Laver told the BBC.

“That allows an opponent to be more aggressive, rather than continually putting pressure on an opponent.”

“Murray gets in a position where he’s maybe up a break or in a position to win a game, and he just plays it back,” added the great Australian.

“That’s when you put your foot down and make sure you win that point so you get either two breaks or you get a break back.

“”That’s the one thing I think maybe he’s missing, being able to say ‘I’ve got to win this point’ or ‘I’ve got to break serve here’ or ‘If I get a chance I’m not just going to play it back, I’m going to be aggressive’.”