Best pals they aren't, but Roger Federer insists there's no lingering bad blood between he and Novak Djokovic heading into their spicy Wimbledon semi-final on Friday night. 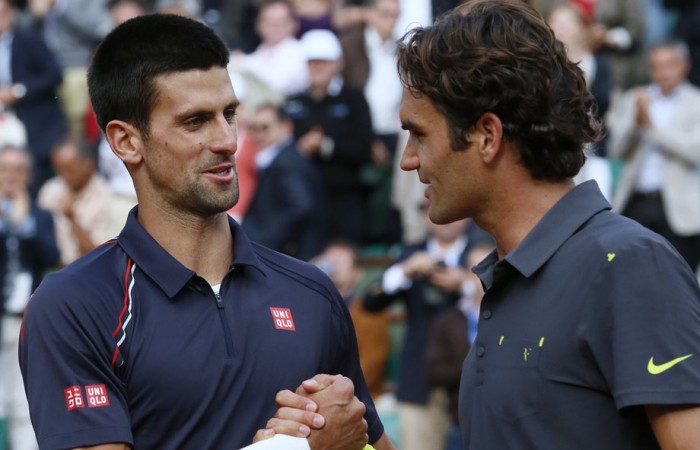 Best pals they aren’t, but Roger Federer insists there’s no lingering bad blood between he and Novak Djokovic heading into their spicy Wimbledon semi-final on Friday night.

A frustrated Federer took a dig at Djokovic’s “fluke” slap forehand return winner to save match point against the Swiss in last year’s US Open semi-final escape in New York.

He also made his feelings known after taking exception to Djokovic’s injury timeout during a Davis Cup tie between Switzerland and Serbia in Geneva back in 2006.

But the 16-times major winner was at pains to play down any animosity between the pair before their eagerly-awaited first-ever Wimbledon stoush.

“I was just upset at him calling the trainer out for no obvious reason against my buddy, Stan, in a five-setter. That was it,” Federer said.

“We had a quick chat about it in Madrid after that and things are cool since a long time between me and him.

“I’ve always respected him. Have I gone out for dinner with him? No.

“But (I’ve) had many meetings with him at the (ATP) council and then now with the grand slams. He’s been nice to work with.

“I have no issues with him – and I hope you believe me.”

For his part, Djokovic says he has nothing but respect for Federer, once again hailed as the greatest ever overnight by Australia’s dual grand slam sweeper Rod Laver.

“Roger Federer certainly is my claim to be the best of all time, if there is such a thing,” said 73-year-old Laver.

“Roger’s got all the shots; his anticipation is unbelievable, his timing off the groundstrokes with his shots, his single-handed backhand is one of the best there is.”

Djokovic added: “He has a lot of respect from me, from all the players. There is no question about it.

“The success that he had over, what, the period of seven, eight years says enough.

“He has won the most grand slams in history. He’s rated probably as the best player in history. He has won everything that a tennis player can win and he’s coming back for more.

“But we are all rivals, we are all opponents. I don’t think about his history or his success or whatever too much when I’m on the court. I just want to win.”

Djokovic’s quarter-final triumph over German Florian Mayer came on the first anniversary of his rise to world No.1.

But Federer can regain the top ranking with victory over the Serb and then success in Sunday’s final against either Andy Murray or Jo-Wilfried Tsonga.

“Look, when you’re playing at this stage of a grand slam against one of your biggest rivals, there is a lot of things involved, a lot of things on the line,” Djokovic shrugged.

“It’s not the first time that I’m playing to win or lose a rankings.

“It’s not something that I think about too much. I really just want to focus on the match.”