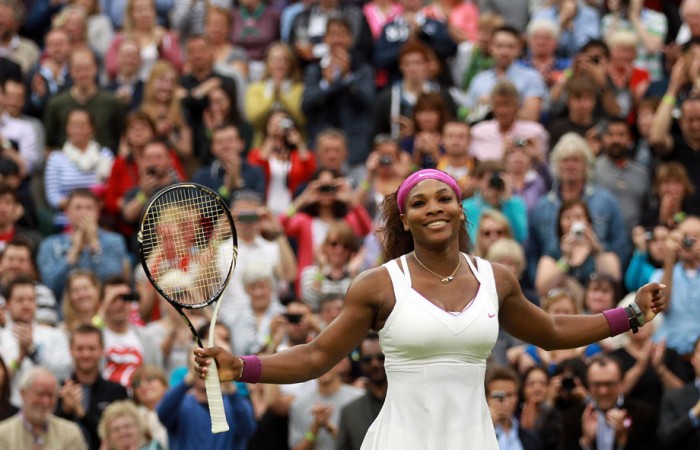 On a mission to regain the crown she relinquished to Kvitova last year, Williams overwhelmed the Czech fourth seed 6-3 7-5 playing under the All England Club’s centre court roof for the very first time.

“It was amazing for me,” Williams said after booking an appointment on Thursday with Australian Open champion Victoria Azarenka.

“There was no elements, no excuses. I loved it.

“I loved the sound, the sound of the balls. It’s kind of like a whoosh and a pop. It kind of flies through and you hear it when it lands.

But Azarenka is high on confidence after venturing to the last four for the second year running and, in doing so, has conceded the least amount of games of anyone left in the draw.

“It’s a great feeling to be in a semifinal of a Grand Slam, but I still want to go all the way and it seems still far away,” the world No.2 said after ending the gallant nine-match grasscourt run of Austrian Tamira Paszek 6-3 7-6(4).

“Hopefully I can do better this year. There’s no better opponent than Serena. I’m really looking forward to it.

“It’s not going to be easy, but it’s the semifinal of a Grand Slam – what else do you expect?”

Looking hungry as ever to break her two-year major title drought, Williams was untouchable on serve against Kvitova, nailing 13 aces – raising her tournament tally to a whopping 61 – and only faced one break point in the entire 84-minute encounter.

Should she continue her dominance over Azarenka, Williams will square off with either Polish third seed Agnieszka Radwanska or eighth seed Angelique Kerber in Saturday’s title match.

Kerber eliminated fellow German Sabine Lisicki 6-3 6-7(7) 7-5 to tee up a semifinal on Thursday with Radwanska, who battled to a three-hour, late-night 5-7 6-4 7-5 triumph over Russian Maria Kirilenko.

Lisicki had reached the semifinals last year and taken out world No.1 Maria Sharapova in the fourth round, but fell victim to the most prolific winner this year on the WTA Tour.

Kerber’s success was her 46th of the season and vaulted the 24-year-old into her second Grand Slam semifinal.

The left-hander also made the last four at the 2011 US Open, where she lost to Samantha Stosur.

“It was a very tough and important match for me,” Kerber said.