Home hope Andy Murray left the moaning to others as he took matters in his own hands to join Novak Djokovic and Roger Federer in the Wimbledon quarterfinals. 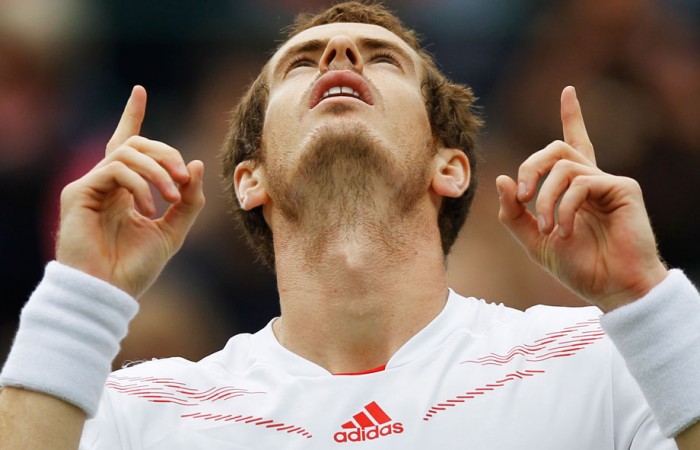 Home hope Andy Murray left the moaning to others as he took matters in his own hands to join Novak Djokovic and Roger Federer in the Wimbledon quarterfinals.

Murray returned to the All England Club on Tuesday up a set and a service break in his fourth-round match against Marin Cilic and wasted little time romping to a 7-5 6-2 6-3 victory.

He had to endure a second frustrating rain delay before impressively ending the Queen’s Club champion’s eight-match grasscourt winning streak to book a quarterfinal on Wednesday with Spanish seventh seed David Ferrer.

Murray is eyeing a fourth consecutive semifinal appearance at the All England Club and, with no Rafael Nadal standing in his way this year, expectations are sky high that the Scot will be Britain’s first men’s Grand Slam finalist since 1938 – at least.

Ferrer, though, trounced Argentine ninth seed Juan Martin del Potro 6-3 6-2 6-3 in his rain-delayed fourth-round match, has yet to drop all tournament and eliminated Murray at the same quarterfinal stage at last month’s French Open on clay.

He will be no pushover for Britain’s perennial Grand Slam hope.

With the forecast miserable for London this week, the All England Club’s decision to play Murray’s fourth-round match on court one, rather than centre court and its retractable roof, drew howls of disapproval.

But faced with the prospect of having to play three days straight to make the last four, the fourth-seeded Scot refused to complain.

“I honestly don’t care which court I play on. It makes no difference,” Murray said after putting Cilic to the sword.

“But if you play on centre with the roof you know you’ll get your match in.

“But I don’t deserve to play every match on centre.”

Playing with due urgency as ominous dark clouds continued to hover, Murray spent barely an hour on court on Tuesday.

He broke Cilic in the eighth game of the second set to surge to a two-sets-to-love lead.

Serving superbly, Murray fought off four break points in the opening game of the third set to safely hold and claimed the vital third-set service break in the fourth game.

The one break was enough as the fourth seed closed out the stop-start match in two hours and 10 minutes.

Wednesday’s other quarterfinal in Murray’s bottom half of the draw pits French fifth seed Jo-Wilfried Tsonga against German Philipp Kohlschreiber.

In the top half of the draw, titleholder Djokovic and six-time champion Federer remain on a semifinal collision course.

Djokovic meets German Florian Mayer in his quarterfinal on Wednesday after clinically disposing of fellow Serb Viktor Troicki 6-3 6-1 6-3 in his fourth-round mis-match on Monday.

Mayer completed his own rain-interrupted 6-3 6-1 3-6 6-2 victory over Frenchman Richard Gasquet on Tuesday.

Federer is up against Russian Mikhail Youzhny after beating a back injury and Belgian Xavier Malisse 7-6(1) 6-1 4-6 6-3 to reach the last eight for the 33rd straight time at a major.