No Wimbledon regrets for Clijsters

Kim Clijsters walked away from her tennis "Disneyland" without regrets, just special memories, after her Wimbledon swan song ended in a fourth-round drubbing. 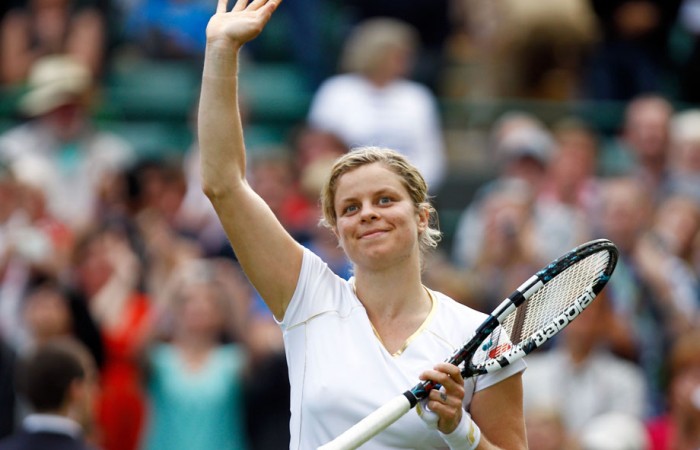 Kim Clijsters walked away from her tennis “Disneyland” without regrets, just special memories, after her Wimbledon swan song ended in a fourth-round drubbing.

Clijsters will retire after September’s US Open, meaning Wimbledon will forever remain the only Grand Slam where she failed to make a final.

But the 29-year-old tennis super-mum had no complaints and said she didn’t feel the slightest bit sad after playing on London’s hallowed lawns for the last time.

“I just had the feeling that there was absolutely nothing I could have done today to have won that match,” Clijsters said after her 6-1 6-1 loss on Monday to German Angelique Kerber.

“My opponent was better on every level. That’s all I was thinking about.

“I won’t be sorry about anything. I know that every time that I’ve played here I’ve given my best.”

Clijsters reigned three times in New York, reached a final in Paris and last year briefly regained her world No.1 ranking after finally breaking through at the Australian Open in Melbourne.

But semifinal appearances in 2003 and 2006 were the best she could manage in nine tries at the All England Club.

Having dreamed of playing at Wimbledon since before she was a junior, doing just that was enough.

“Watching Wimbledon during summer holidays from Belgium, watching it on TV, you just kind of felt the magic coming through the television,” Clijsters said.

“The first year that I played here, I was here just to take it all in. I don’t even think I was here to play tennis. I needed to just open my eyes and look at everything.

“To me, this was like Disneyland to another child. It was such a beautiful thing.

“The next year or the year after I was able to make the finals here in juniors and that was a very special moment.

“I was able to go to the championship ball. Won doubles here. So I have a lot of good memories.”

Another of her highlights was playing her childhood idol Steffi Graf in the fourth round on her debut as a 16-year-old in 1999.

“Definitely one of my dreams come true as a young up-and-coming player.”

Another of Clijsters’ most cherished memories is of her father, Belgium soccer great Leo who died of cancer in 2009, accompanying her to the courts for three days straight one year without seeing her play.

“He sat in the rain and waited for the ball kids or the groundsmen to take the covers off because he wanted that seat because he thought that would bring me luck.

Three years after her father’s death and knowing she won’t be back, Clijsters says she’s found herself explaining Wimbledon’s great history to her own four-year-old daughter Jada.