Kyrgios, Thompson and Saville into second round

Australians Nick Kyrgios, Jordan Thompson and Luke Saville are all through to the second round of the boys' singles championships at Wimbledon. 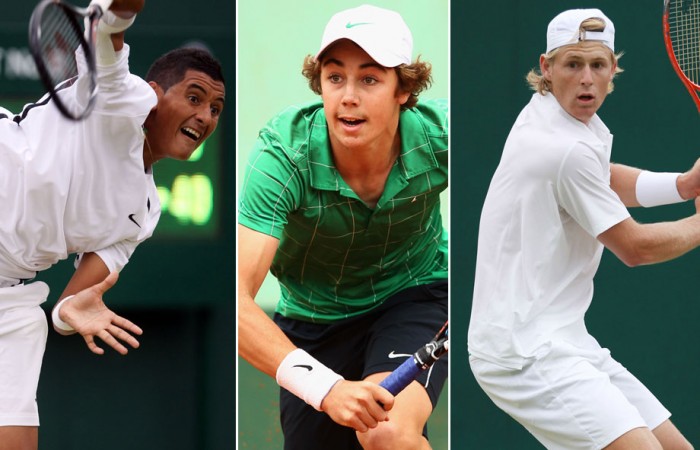 Australians Nick Kyrgios, Jordan Thompson and Luke Saville are all through to the second round of the boys’ singles championships at Wimbledon.

Kyrgios raced into the second round with a 6-2 6-2 defeat of Greek Markos Kalovelonis. The Australian smacked 12 aces and won 89 per cent of his first serves on his way to a second-round meeting with Argentinean 10th seed Mateo Nicolas Martinez.

Thompson returned an identical score to Kyrgios – a 6-2 6-2 victory over local Jonny O’Mara. Thompson made just six unforced errors for the match, while O’Mara didn’t do himself any favours by racking up 27 of his own. Thomspon will have to wait to find out who his second-round opponent will be – either 16th seed Frederico Ferre Silva of Portugal or Marek Routa of the Czech Republic.

After losing to his French rival last week in the lead-up event at Roehampton, Saville turned the tables on Monday with a 6-1 6-4 victory.

“I was up 6-1 5-2 serving today and hadn’t even looked like getting broken, hadn’t faced a break point.

“He played a great game. It wasn’t necessarily me getting a little bit nervous.

“He played good, but I managed to close it out in the end so I was pretty happy to get off to a good start to the tournament.

“It was pretty cold and a little bit of a sprinkle the whole time, so the court was a bit slippery.”

Saville, who also won the Australian Open boys’ title this year, is bidding to join the likes of all-time great Stefan Edberg as a triple junior Grand Slam champion.

Saville, though, said it was great to be back testing himself.

“I can look at it almost two ways,” he said.

“Or I can look at it as a big challenge: come here, defend my title and everyone’s going to be hunting me down as the No.1 seed.

“But I love playing matches, I want to get out here, improve my game, improve my ability on grass and see what I can do out here.”