World No.1 Novak Djokovic and six-time champion Roger Federer are safely through to the Wimbledon quarterfinals. 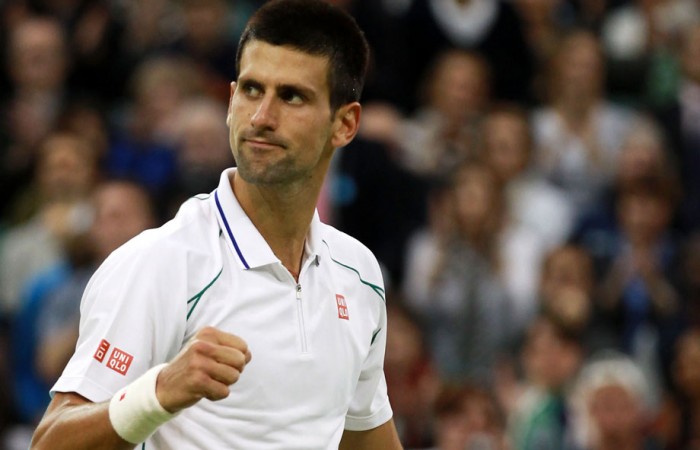 World No.1 Novak Djokovic and six-time champion Roger Federer are safely through to the Wimbledon quarterfinals.

But the rest of the men’s title aspirants – including big home hope Andy Murray – have been left hanging due to rain that turned Magic Monday at the All England Club into Miserable Monday.

While all eight women’s fourth-round matches were completed, Djokovic, Federer and Russian Mikhail Youzhny were the only three men happily left high and dry when play on all outside courts was suspended for the day just before 8 pm local London time.

“I think I played really well throughout the whole match,” Djokovic said.

“We know each other so well – the first match we played against each other he was nine years old, I was eight years old back in Serbia in a local tournament.

“So there’s no secrets between us and it’s never easy to play your very good friend, somebody you grew up with, but today there had to be one loser.”

The top seed will play either German Florian Mayer or Frenchman Richard Gasquet on Wednesday for a semifinal berth.

Federer required a medical timeout to have painkillers mid-way through the first set before settling down to beat the 2002 semifinalist in two hours and and 11 minutes.

The 16-time major winner next plays his bunny Youzhny on Wednesday for a likely showdown on Friday with Djokovic.

With two days rest, Federer was confident of being back to 100 per cent for his quarterfinal, his 10th straight at the All England Club.

“My back is OK. It started to feel better as the match went on,” the third seed said.

“It come and goes. When you play on tour for over 15 years, the back does hurt at times.

“You just hope it doesn’t come in a big match. It was scary, but the treatment was a big help.”

Turning 31, Federer said the cold and windy conditions undoubtedly contributed to his suffering with his match also delayed at one stage because of the rain.

The all-time Grand Slam title leader can displace Djokovic as world No.1 if he matches Pete Sampras’s record seven Wimbledon crowns on Sunday.

Such a dream scenario would also draw the Swiss superstar level with Sampras for the longest total reign as world No.1 – 286 weeks.

Fourth seed Murray was in control leading Queen’s Club champion Marin Cilic 7-5 3-1, but won’t be thrilled about the returning on Tuesday to complete that match and then back up for the quarterfinals on Wednesday.

Should he progress, Murray would come up against either Spanish seventh seed David Ferrer or Argentine ninth seed Juan Martin del Potro, who haven’t even started their fourth-round affair.

Nor did American qualifier Brian Baker or German Philipp Kohlschreiber get on court on Monday.