Andy Roddick kissed Wimbledon Centre Court farewell on Saturday, but the 'alpha male' of American tennis refused to reveal whether it meant goodbye for good. 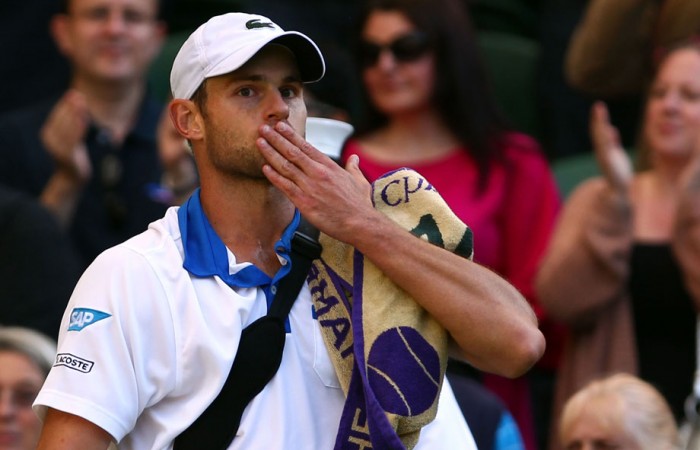 Andy Roddick kissed Wimbledon Centre Court farewell on Saturday, but the ‘alpha male’ of American tennis refused to reveal whether it meant goodbye for good.

But it was his parting gesture which was the talking point.

The 29-year-old, who came into the tournament on the back of a 31st career title in Eastbourne, applauded all four sides of the court, blowing a kiss to the fans, many of whom would have witnessed his three agonising final defeats to Roger Federer in 2004, 2005 and 2009.

That last loss, an epic match which ended 16-14 in the fifth set, was Roddick’s last memorable campaign at the All England Club.

He lost in the last 16 in 2010, the third round last year and Saturday’s loss, also in the third round, will only increase speculation over the former world No.1’s career.

“I don’t have a definitive answer, I can’t give you much else,” said the 2003 US Open champion, when asked if his 12th Wimbledon was also his last.

Roddick is now 25th in the world and missed most of the claycourt season with hamstring trouble until he returned just in time for the French Open where he went out in the first round.

It is also three years since he got beyond the quarter-finals of a Grand Slam.

“I enjoy what I do. Being a tennis player is a tough thing. To keep a certain level for a really long time, it’s not easy,” said Roddick.

“I’m proud that I’ve been very dedicated to my craft.

“There aren’t many days when I go to sleep wondering if I could have done more as far as preparation or work or effort. So that makes it easier to walk off the court and be proud.”

Compatriot Mardy Fish, who did make it to the last 16 on Saturday, described Roddick as the one of the greatest-ever players on grass.

“He is certainly one of the best grass court players to never win Wimbledon — three finals, all to Federer. That’s unfortunate,” said Fish.

“There are a lot of guys who have won grand slams that haven’t had to play Roger Federer in the final to win.

“I’m assuming he’ll come back, but if he doesn’t, he’s one of the best to never win Wimbledon. I know that he wanted it badly.”

Roddick was the last American man to win a major before the super-powers of Federer, Rafael Nadal and Novak Djokovic took a stranglehold on the grand slams.

Adding to his burden was being entrusted with leading a new generation of players after Andre Agassi and Pete Sampras had left the scene.

“He was the alpha male in our generation, certainly the biggest name by a good distance,” said Fish.