World number one Maria Sharapova and four-time Grand Slam champion Kim Clijsters are on course for an emotional last eight clash at Wimbledon after breezing into the fourth round on Friday. 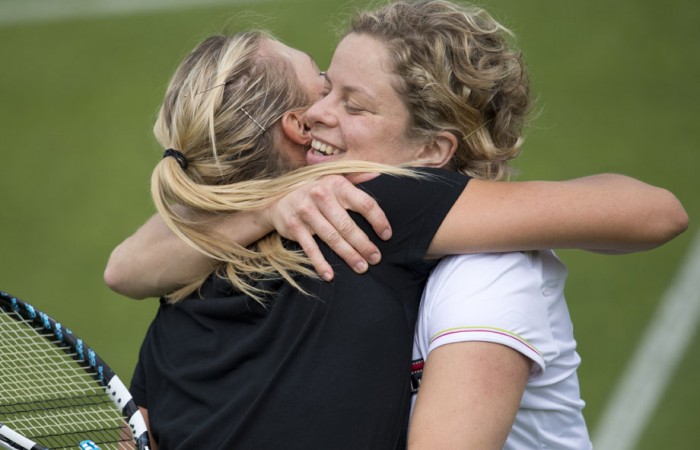 World number one Maria Sharapova and four-time Grand Slam champion Kim Clijsters are on course for an emotional last eight clash at Wimbledon after breezing into the fourth round on Friday.

Sharapova cruised to a 6-1 6-4 victory over Taiwan’s Hsieh Su-Wei despite blustery conditions on Court One playing havoc with her serve.

“The conditions weren’t easy but it’s just about being patient and maybe a little bit smarter,” Sharapova said. “Considering the conditions, I’m pretty happy with the way I played.”

French Open champion Sharapova will play German 15th seed Sabine Lisicki for place in the quarter-finals in rematch of last year’s semi-final which the Russian won in straight sets.

Lisicki, who reached the last four as a wildcard in 2011, downed American teenager Sloane Stephens 7-6 (7-5) 1-6 6-2 and immediately set her sights on a revenge mission against Sharapova.

“I love these big matches,” Lisicki said. “She’s a great fighter and is full of confidence now.

“It’s another challenge. I just have to go for my shots and can’t make too many mistakes.”

Clijsters, playing at Wimbledon for the last time, enjoyed an easier than expected path to the last 16 when breathing problems forced her 12th seeded Russian opponent Vera Zvonareva to quit.

Zvonareva, runner-up in the 2010 Wimbledon final, left Court One in tears after calling for a medical time-out midway through the second set.

She returned to play one more game but the breathing problem was still troubling her so she retired with 29-year-old Clijsters 6-3 4-3 ahead.

“I heard her coughing a lot. After long rallies it took her a long time to recover,” said Clijsters, who will quit tennis after the US Open later this year.

“She’s a fighter. We’ve had some really tough battles, so it’s sad to see her have to pull out.”

Next up for Clijsters is a clash with Angelique Kerber, the eighth seeded German who will be playing in the fourth round for the first time after a 6-2 6-3 win against Christina McHale of the United States.

If Sharapova and former world number one Clijsters both come through their last 16 matches unscathed the two giants of the women’s game will clash for a place in the semi-finals.

Watson’s win over Jamie Hampton in her previous match made the 20-year-old the first British woman to reach the third round for 10 years.

That victory came hot on the heels of her first round triumph over Iveta Benesova — the first a British woman had won on Centre Court since Jo Durie in 1985.

But Radswanska’s extra class proved too much for Watson on her return to Centre Court and the Pole, twice a quarter-finalist, will face 20th seed Nadia Petrov or Italian qualifier Camila Giorgi in the last 16.

Chinese 30th seed Peng Shuai stormed into the fourth round with a 6-1 6-2 demolition of Arantxa Rus.

Holland’s Rus had shocked US Open champion and fifth seed Sam Stosur in the previous round, but she couldn’t summon up a repeat of that dynamic display.

Peng, who also reached the last 16 at Wimbledon 12 months ago, next faces 17th seed Maria Kirilenko after the Russian thrashed Romania’s Sorana Cirstea 6-3 6-1 to reach the Wimbledon fourth round for the first time.

Peng, 26, has never played in a Grand Slam quarter-final, falling in the fourth round three times in 2011 at the Australian Open, Wimbledon and the US Open.