Stosur powers into second round

Samantha Stosur has hailed her first-round Wimbledon win as one of her best grasscourt performances in years. 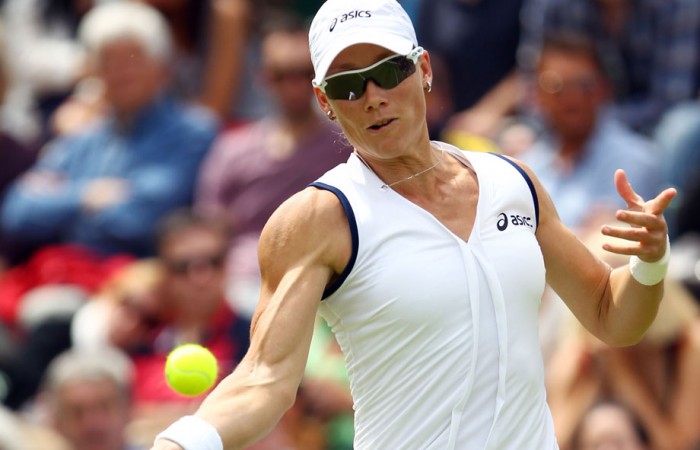 Samantha Stosur has hailed her first-round Wimbledon win as one of her best grasscourt performances in years.

In a highly impressive display of controlled power, Stosur clubbed 19 winners to see off world No.40 Carla Suarez Navarro 6-1 6-3 in just 62 minutes.

“The mindset was to be aggressive, but not to do it within three shots,” she said.

“If it had to be a rally, then rally it and wait for that right ball and I think that’s certainly something that I did much better today than in previous matches here.”

“It’s one of my best grasscourt matches in recent years.

“To get through the first round was a big hurdle for me to overcome.”

Stosur’s reward for her first win at the All England Club since 2009 was a second-round meeting on Wednesday with world No.72 Arantxa Rus of the Netherlands.

The US Open champion will be chasing a spot in the third round for only the second time in 10 Wimbledon campaigns.

Her draw this year is a favourable one and, if she can get through her next outing, Stosur’s first seeded challenge is likely to come from Russian Maria Kirilenko in round three on Friday.

China’s ninth seed Li Na, who thrashed Kazakhstan’s Ksenia Pervak 6-3 6-1 in her opener on Monday, is scheduled to face Stosur in the last 16.

Stosur has struggled to explain her poor record on the Wimbledon grass and wasn’t about to die wondering on Monday following a first-round loss last year to world No.262 Melinda Czink.

The Australian came out swinging and was up 5-0 inside 20 minutes.

There was hardly any let-up in the second, with Stosur bludgeoning her way to an early break for a 2-0 advantage.

Out of nowhere, Suarez Navarro broke back in the third game when Stosur was caught off balance and netted an awkward backhand.

But it was Stosur’s only lapse as she claimed two more breaks to wrap up the match in one hour and two minutes.

The world No.5 dropped only 12 points on serve, while her 19 winners more than offset 11 unforced errors in her bold new approach to grasscourt tennis.

Stosur was the only Australian winner on day one of the championships.