World No.1 Maria Sharapova swept into the second round at Wimbledon with a 6-2 6-3 victory over Australia's Anastasia Rodionova on Monday. 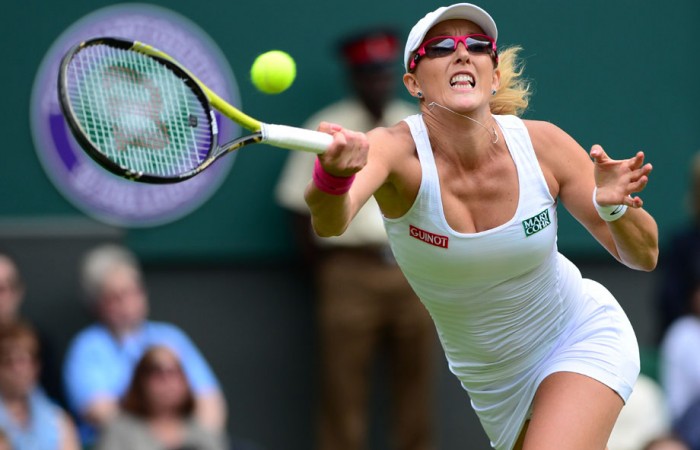 World No.1 Maria Sharapova swept into the second round at Wimbledon with a 6-2 6-3 victory over Australia’s Anastasia Rodionova on Monday.

Sharapova was playing for the first time since her French Open final victory over Sara Errani earlier this month and the Russian’s confidence was clearly sky high as she demolished Rodionova in just 70 minutes.

The 25-year-old will face Bulgaria’s Tsvetana Pironkova, who reached the semifinals in 2010, in the last 64.

Sharapova’s triumph in Paris was a magical moment as it completed a career Grand Slam and capped her recovery from serious shoulder surgery that, at one stage, looked capable of wrecking her career.

But there was no chance of Sharapova, who won Wimbledon as a 17-year-old, resting on her laurels as she still has unfinished business at the All England Club.

The Russian has reached the final in three of the past four Grand Slams, but the first of those ended in a surprise defeat to Petra Kvitova in London 12 months ago.

Sharapova was back on Centre Court for the first time since then and the top seed looked determined to erase those bitter memories.

She had routed Rodionova without dropping a single set in her four previous meetings with the world No.133 and this clash followed a familiar pattern.

Sharapova broke in the second game and pushed home her advantage with another break to move 5-0 ahead in just 15 minutes.

Rodionova, 30, finally got on the scoreboard in a sixth game that lasted nearly as long as the first five and then secured a break of her own.

But it was far too late to prevent Sharapova closing out the set and she continued in equally dominant mood in the second set.

The Russian landed the crucial break in the fourth game for a 3-1 lead and eased through in confident fashion.