Bernard Tomic is banking on his big-match temperament and funky style to get him through to the second week of Wimbledon for the second year running. 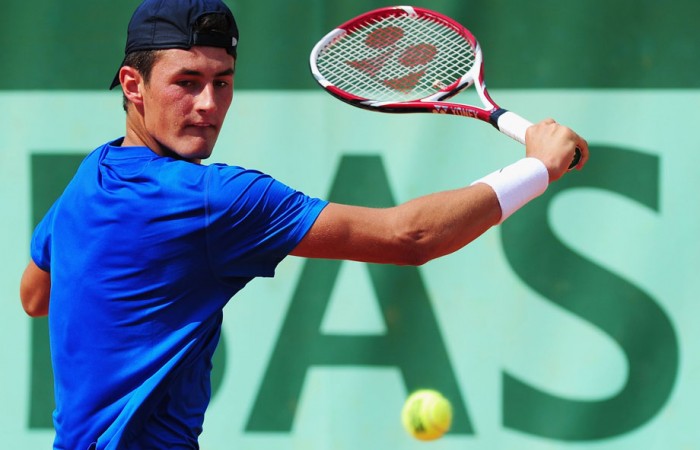 Bernard Tomic is banking on his big-match temperament and funky style to get him through to the second week of Wimbledon for the second year running.

Tomic admits he’s under pressure as he defends quarterfinal points accrued during his exciting run to the last eight out of qualifying last year.

His form and health have been a major concern, but the 19-year-old – who also reached the last 16 at the Australian Open before running into Roger Federer – says returning to the All England Club will bring out his best.

“I’m really excited. Grass is always for me my favourite surface,” Tomic told AAP ahead of his first-round clash on Tuesday with promising young Belgian David Goffin.

“I feel like I can do like I did last year and being sick last week when Tommy [Haas] won the tournament is a good sign too.”

The teenager was referring to Haas’s victory over Federer in the Halle final just a few days after the German veteran defeated an ailing Tomic in the opening round.

Tomic was trailing 5-2 in the opening set before packing it in as he battled a sapping virus.

“You have to play differently on it,” he said.

“Grass is hard to get the ball up high – it’s always low and that’s where I prefer it and these guys don’t prefer it on the tour these days.

“Eighty, 90 per cent of the tour is guys that love to play on the clay. They play on hard court as well and they get to the grass courts and they choke up.

“That’s why they struggle against my game because I take a bit of the normal out of tennis.”

It was actually Tomic who struggled in his last grasscourt outing before Wimbledon.

But he put his capitulation from 5-2 up in the third set against Italian Fabio Fognini at Eastbourne last week down to being only 80 per cent fit and also a concentration lapse, which he needed to address.

“You look at the top players, they have to play against lower ranked players because they’re at the top.

“But you can only get back and better. You’re not going to get to No.1 at the age of 19 nowadays.”

Like Tomic, countryman Lleyton Hewitt can also draw inspiration from Haas’s title win in Halle, as well as David Nalbandian’s run to the Queen’s Club final.

Both are players from Hewitt’s era and the 31-year-old wildcard will need to produce a vintage performance himself to survive a first-round acid test on Tuesday against French fifth seed Jo-Wilfried Tsonga.

Hewitt is under no illusions as to the enormity of his task, conceding the top five of Novak Djokovic, Rafael Nadal, Roger Federer, Andy Murray and Tsonga were “way above everyone else right at the moment”.

“It’s a matter of taking those chances when you get them,” Hewitt said.

“Grasscourt tennis is like that. Sometimes it’s a more mental game than physical because there are only one or two points in a whole five-set match that can turn in tiebreaks or tight situations.”