Stosur ready to roll the dice

Samantha Stosur is vowing to roll the dice and play high-risk tennis in a concerted effort to break her barren run at Wimbledon. 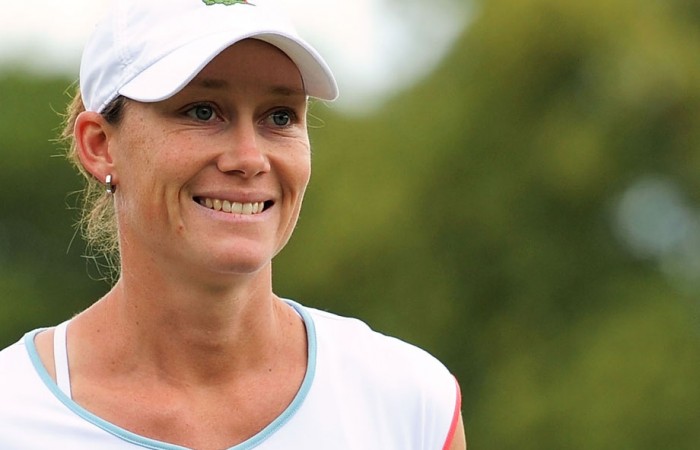 Samantha Stosur is vowing to roll the dice and play high-risk tennis in a concerted effort to break her barren run at Wimbledon.

Stosur has won a Grand Slam on hard courts and reached another major final on clay, but still can’t put her finger on why she can’t come to terms with grass, let alone master it.

The world No.5 enters her 10th Wimbledon on Monday having ventured as far as the third round just once.

She has been removed from the draw in her opening match the past two years and accepts enough is enough. It’s time to try something different.

“I’ve struggled on this surface because you can’t just hit a good kick serve wide and try and work the point with a forehand to the open court,” Stosur told AAP ahead of her first-round clash with Spaniard Carla Suarez Navarro.

“It’s just not quite as easy as that, to use the things that I want to use typically on this surface.

“I’ve got to realise that and maybe structure my points a little bit differently.

“I’ve got be prepared to maybe take a bit more risk on some second serves and hit more slice serves than I usually do and not panic when I get down love-30 and think if I use this it’s going to be really hard to win the point.

“So for sure a lot of it is about not getting into that panic mode if you’re down in a game because, as quickly as you get down, you can get it back.

“But when you’re out on the court you’ve got to remember that in that pressure moment.

“Playing on grass is a challenge that can take some players a while to appreciate and to accept the changes they need to make to their games to have success,” he said.

“It’s definitely a surface that Sam needs to make adjustments on tactically and she needs to be comfortable with constructing points differently.

“No doubt a lot of her strengths aren’t as conducive to making girls uncomfortable on grass as they are on other higher-bouncing surfaces.

“Sam has other strengths such as her slice backhand and serve, ability coming forward, serve variety that can be used for success on a lower-bouncing surface.

“Most girls whom have had success on the grass are tall, flat ball strikers like Venus [Williams], [Petra] Kvitova, Serena [Williams], [Lindsay] Davenport etc.

“These players make life pretty difficult, but not impossible, for players whom play with shape on the grass [like Sam].”