Hewitt hoping for a slice of luck

Lleyton Hewitt is hoping Jo-Wilfried Tsonga's finger injury is as troubling as the Frenchman first feared after being thrust into a nasty first-round Wimbledon showdown with the classy world No.5. 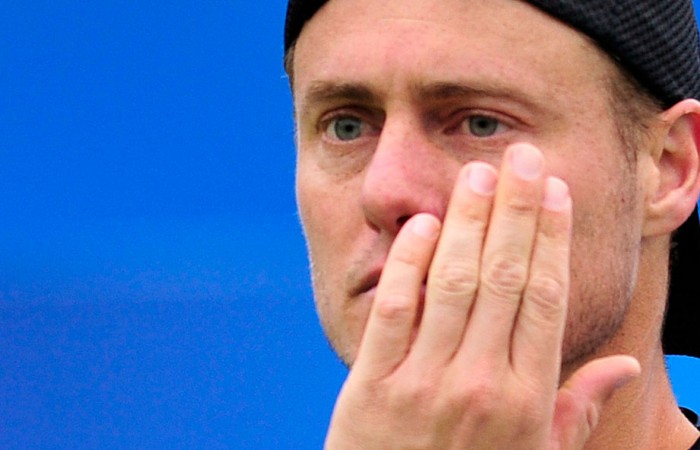 Lleyton Hewitt is hoping Jo-Wilfried Tsonga’s finger injury is as troubling as the Frenchman first feared after being thrust into a nasty first-round Wimbledon showdown with the classy world No.5.

Continuing his incredibly shocking career run in grand slam draws, Hewitt was assigned to Mission Improbable on Friday ahead of his 14th consecutive appearance at The Championships.

In the past eight years, Hewitt has amazingly lost to the eventual champion in 13 majors and drawn a top-three rival before the quarter-finals on 10 occasions.

One of only four All England Club champions in the 128-man draw, Hewitt was again hoping for a little better than a first-round date with Roger Federer’s 2011 quarter-final conqueror on the 10th anniversary of the Australian’s title triumph at the spiritual home of tennis.

“Playing Tsonga on grass is not really what you want,” Hewitt’s manager David Drysdale told AAP.

“If he comes out serving big and really firing, it’s going to be tough for Lleyton.

“Mind you, playing Lleyton on grass probably wouldn’t be too appealing for Tsonga either.

“But the outcome is definitely going to be decided by Tsonga’s racquet.”

Or perhaps by the Frenchman’s right little finger, which he sprained in a heavy fall during his loss to Ivan Dodig at Queen’s last week.

While x-rays revealed no break or ligament damage, which Tsonga initially suspected, the former Australian Open runner-up was ordered to have several days off to recover.

“From our point of view, we’ve got to hope it’s pretty bad,” Drysdale said.

In addition to his unprecedented grand slam comeback win from two sets down against Federer last year, Tsonga held four match points against world No.1 Novak Djokovic in this month’s French Open quarter-finals.

Hewitt, though, isn’t about to throw in the towel and was “feeling pretty good” after downing Wimbledon’s 19th seed Kei Nishikori 7-6(4) 6-3 in a grasscourt exhibition match in London during the week.

“Look, the beauty of this match is Lleyton’s got nothing to lose,” Drysdale said.

“All the pressure is definitely going to be on Tsonga, not Lleyton. So he can go out there and have a real go.

“Tsonga’s a funny sort of guy. If Lleyton starts well and gets on top, that can be the difference.

“And you know that it’s going to be on a show court and that’s going to help Lleyton as well.

“You never know, if he can get through this one, he’ll end up with the fifth seed’s draw.”

Young countryman Bernard Tomic, the 20th seed, fared significantly better in the draw but will still need to be back on his game after a first-round loss at Eastbourne to survive a challenging opener against talented Belgian David Goffin.

Goffin took the first set off Federer during his bold run to the last 16 at Roland Garros and showed a liking to grass with two qualifying wins at SW19 last year.

Victory over the world No.66 would pit Tomic into a second-round clash with either American Jesse Levine or Slovakian Karol Beck, with 10th seed Mardy Fish expected to be the teenager’s first major test in round three.

With only five wins in nine trips to Wimbledon, women’s fifth seed Samantha Stosur won’t be looking past her first-round match against Spaniard Carla Suarez Navarro.

But the Australian does look to have a favourable draw, with two-time major finalist Li Na standing between Stosur and a quarter-final spot.

The tournament begins on Monday.