Samantha Stosur is refusing to panic after suffering a Wimbledon setback with a shock first-round loss to world No.251 Kirsten Flipkens at the WTA lead-up event in the Netherlands. 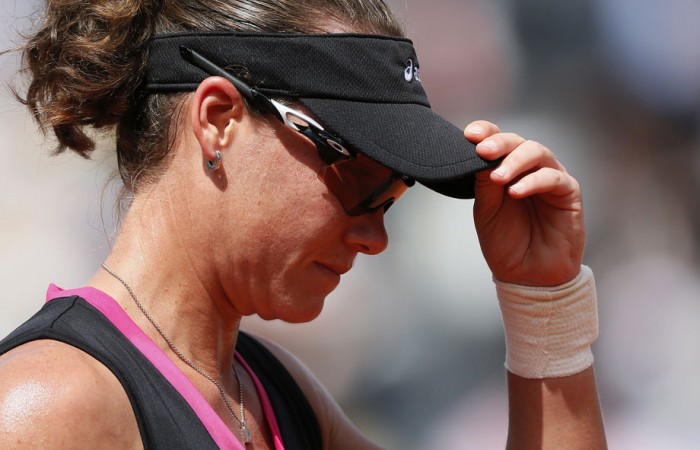 Samantha Stosur is refusing to panic after suffering a Wimbledon setback with a shock first-round loss to world No.251 Kirsten Flipkens at the WTA lead-up event in the Netherlands.

The Australian top seed fell victim to seven double-faults and nine aces from her inspired opponent in a 7-6(7) 6-3 defeat in her first grasscourt match since an equally inexplicable opening-round loss at Wimbledon last year to world No.262 Melinda Czink.

Stosur’s premature exit from s-Hertogenbosch leaves the US Open champion desperately short of grasscourt match practice before Wimbledon gets underway next Monday.

But the world No.5 put on a brave face and said she was unconcerned.

“Overall, I was quite happy with the way I played. It wasn’t really anything disastrous,” Stosur said.

“It’s just a matter of going out there again tomorrow, practising hard and just fine-tuning a few important points and that can make the difference.

“I don’t think I did too much wrong.”

The world No.5 started brightly enough, racing to a 3-0 lead in the first set and had two more break points to open up a 4-0 buffer.

Instead, Flipkens broke back to get back on level terms before Stosur had another chance to take the set in the 10th game, only to snatch at a routine forehand volley.

Some daring serve-volleying earned Stosur three more set points and she appeared to have nabbed the opening set with her fifth ace.

Alas the chair umpire over-ruled and the Belgian made the most of her good fortune to take the set when Stosur was unable to control a low forehand volley.

Stosur admitted the over-rule proved the turning point as she again dropped serve in the second game of the second set and was unable to recover as the lowly ranked Belgian powered to the biggest win of her career in one hour, 35 minutes.

“That was definitely a big moment in that tiebreak and obviously in the end of the match because I really thought I won that set and then you don’t win it and you’re a set behind,” she said.

“You take two steps into the baseline, you pump your firsts and you think you’ve won the set – especially when she’s walking to the changeover as well giving you the point – and the umpire decides that’s he’s going to over-rule.

“Yeah, it was just a few points here and there throughout that first set. I don’t think I did too much wrong.

“I made my set points and on grass sometimes the way it goes.”