Less than four years after fearing her career may be over, Maria Sharapova can complete a rare grand slam set with victory in Saturday's French Open final. 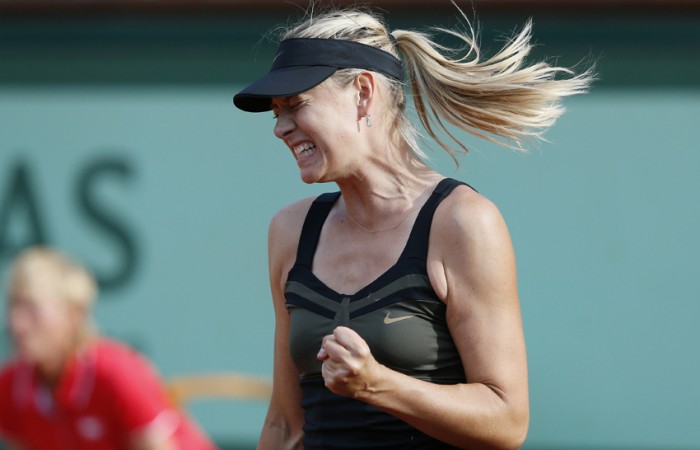 Less than four years after fearing her career may be over, Maria Sharapova can complete a rare grand slam set with victory in Saturday’s French Open final.

The most improved player in women’s tennis stands in her way.

“It’s not finished, so I have one match more,” Errani said after putting Stosur to the sword with a 7-5 1-6 6-3 semifinal boilover at Roland Garros.

Errani admitted that West Australian Casey Dellacqua could well have spared Stosur such despair had she converted a first-set advantage in her 4-6 6-2 6-2 opening-round loss to the unfancied Italian.

“It’s incredible for me. I didn’t expect it and I’m here,” Errani said.

Sharapova looms as an altogether different proposition for the newest member of the world’s top 10.

The two 25-year-olds have never previously clashed – and nor do their CVs come close to a fair match-up.

The 188cm Russian, with $20 million in prize money alone, plus 26 career titles, dwarfs the 164cm Italian in all shapes and forms.

Sharapova regained the world No.1 ranking from Victoria Azarenka with her 6-3 6-3 semifinal victory over Petra Kvitova, a win that not only avenged her Wimbledon final loss to the Czech but which also improved her own outstanding claycourt record to 18 wins from 19 matches in 2012.

Errani has banked a relatively meagre $2.57 million during her 10-year pro career.

And while Errani will be contesting her maiden major championship final, Sharapova is hoping to join the all-time greats with a full collection of Australian, French, Wimbledon and US championships in her career – three-and-a-half years after undergoing career-threatening shoulder surgery to her right serving arm.

The recovery put her out of the sport from August 2008 until May 2009 when her ranking slumped to 126th in the world.

“I was in a position a few years ago where I didn’t quite know if I would ever be here again on this stage playing professionally,” said Sharapova.

“It’s a long road back. It’s a lot of days of frustration and uncertainty not knowing if you’ll ever get there, not knowing how much you want it, not knowing whether it would be a moment like that for you again.

“So there’s definitely a lot of tough things you have to go through to get to this point, but it’s all really worth it.

“I have played tennis since I was four years old. I committed myself to this sport. I’ve always loved what I did.

“When it was taken away from me for a while, that’s when I realised how grateful I was and how lucky I was to be playing it.”