Former world No.1 Jim Courier believes Sam Stosur has embraced tennis technology to the extent that she can revolutionise the women's game. 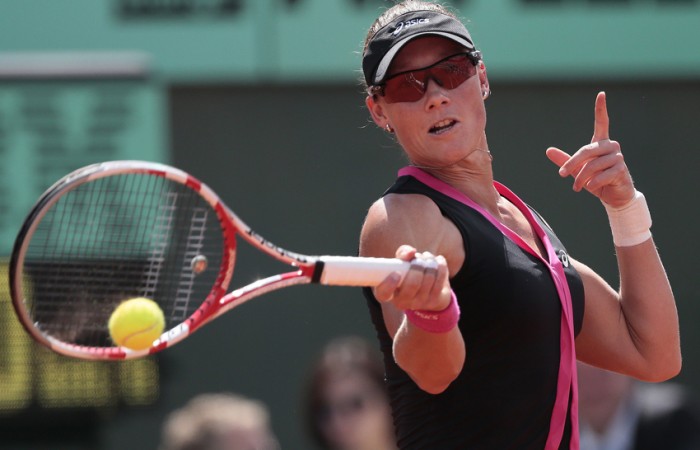 As scant as it may be, Samantha Stosur is taking consolation from rave comparisons with Rafael Nadal’s imperious claycourt game as she picks up the pieces from her French Open semifinal loss.

Dual French Open champion and former world No.1 Jim Courier believes Stosur has embraced tennis technology to such an impressive extent that she can revolutionise the way the women’s game is played.

“For my money, she’s the very first female player to harness the power of the racquets and the control of the strings,” Courier said before Stosur’s surpriseloss to Italian Sara Errani at Roland Garros on Thursday.

“(Gabriela) Sabatini was a beautiful top-spinning player with a great slice backhand, too, but she didn’t generate the up and down on the ball that technology now allows.

“Sabatini had a heavier racquet. The technology these days – the racquets are mostly hollow inside.

“In my day, they were filled with graphite and heavier. Now you can create more racquet-head speed, which is what creates the up and down on the ball.

“Sam Stosur is the first one to harness that power.”

With lighter racquets, Courier estimates modern strings can generate 20 per cent more spin, allowing players to significantly reduce their margin of error by taking the net out of the equation if groundstrokes are executed precisely.

“If you remember what gut string is, this is turbo gut. This is gut on steroids,” he said.

“It takes the ball and puts an incredible amount of spin on the ball. The racquets give them more power, but the string allows them to control it.

“Most of the women’s players now, they probably grew up emulating the Williams sisters, hitting the flatter ball – Lindsay Davenport was a great flat-ball hitter.

“Stosur, for me, is a transformational player by the way she’s harnessed the technology.

“She’s the only one who can play true, Rafa-style claycourt tennis out here with the kick serve, with the big forehand that bites so much.”

“I would like to see women’s tennis played with more topspin,” Smith said.

“There’s also a lot of complaints about women’s second serves. It’s still the weakest part of women’s tennis – women do not have a great kick serve because they don’t have the wrist strength that the men do.

“But Sam Stosur, she has cables in those wrists. It’s not normal, how she serves. She’s just an incredible physical specimen.

“Look where her racquet finishes. It finishes down her right-hand side. I don’t think there’s another woman that can physically do that.”

Indeed, Stosur’s vanquished quarter-final opponent Dominika Cibulkova, like countless other victims before her, claimed Stosur “played like a man”.

The laidback US Open champion says that’s a compliment.

“You hear a few people saying that,” Stosur said.

“Maybe some of the past male players like to watch me play or whatever else just because I play a bit different.

“Maybe they can relate to it a bit more with bigger forehand rather than a backhand and good serve and what-not.

“That’s all nice compliments to have, so it didn’t bother me, that’s for sure. Makes you feel good when people like watching you play.”