Stosur: I just didn’t do enough

A shattered Sam Stosur has spoken of her disappointment at how her error-prone performance against Sara Errani came in the semifinals of a Grand Slam. 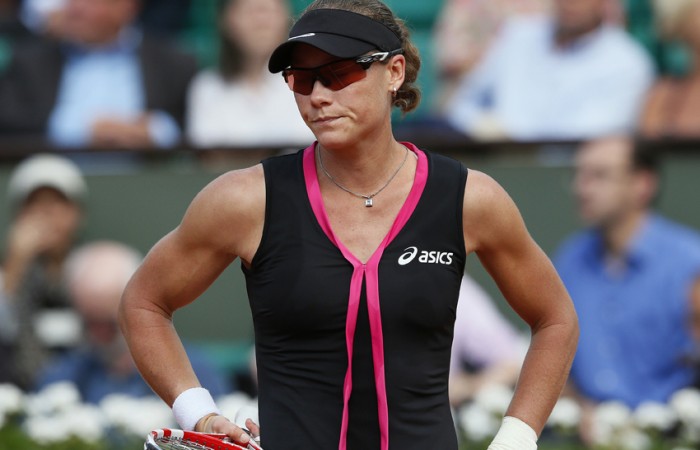 Sara Errani has left Samantha Stosur shattered and shellshocked after scuppering the Australian’s French Open hopes with a semifinal boilover.

Aided by a crippling 49 unforced errors from Stosur, Errani evoked painful memories of the Australian’s 2010 Roland Garros final loss to fellow Italian Francesca Schiavone with a 7-5 1-6 6-3 ambush on Thursday.

Errani had lost all five previous encounters with Stosur, including last month in Rome, and was contesting her maiden grand slam semifinal.

And two years ago, Stosur led Schiavone 4-1 in their head-to-head before coming unstuck on one of the sport’s greatest stages in the Roland Garros decider.

A red-eyed Stosur admitted it was too soon for her to quite reconcile her devastating defeat.

“I need to kind of probably look back on the match a bit more before I can give it a true reflection of what I think,” Stosur said.

“It’s a semifinal of a slam – of course you’re going to be nervous. I don’t know if that beforehand affected me throughout the match.

“I just didn’t do enough, really. Just sucks that it happened here today.

“You do it somewhere else you don’t maybe worry about it so much, but here it obviously hurts a lot more.”

On the other side of the net, Errani – seeded 21st – displayed few outward signs of nerves in spectacularly turning the tables on Stosur, who put in a streaky performance on a windswept Court Philippe Chatrier.

Errani will again be a big underdog, but will nevertheless fancy her chances of becoming only the third non-top 10 woman in French Open history to lift the trophy.

The 25-year-old boasts a tour-leading three claycourt titles in 2012 and has now won 24 of 27 matches on the slow surface this season.

Stosur framed an innumerable number of forehands in the heavy and hazardous conditions and found herself under growing pressure almost as soon as she handed back an early service break in the opening set.

Rain in Paris delayed the start of the match by more than an hour and robbed Stosur of the hot and sunny weather in which she thrives on the Roland Garros dirt.

The world No.6 made a promising enough start, firing down three aces in her opening service game and then breaking Errani for 2-0 with a scorching forehand return winner.

In a worrying pointer of things to come, though, Stosur was broken to love as Errani reeled off nine straight points to gain a foothold in the match.

It was all she needed to seize the opening set after 46 minutes.

With Stosur repeatedly unable to turn small windows of opportunities into breaks, the set looked headed for a tiebreaker until Errani grabbed a third service break in the 12th game.

Staring down the barrel, Stosur came out with greater conviction in the second set, breaking Errani twice with more penetrative groundstrokes and typically powerhouse serving.

The Australian snared the set to put the match back on level terms with her 11th ace.

But she gifted the Italian the third-set advantage with a double-fault, two backhand errors and another shanked forehand to fall behind 3-0 and love-30.

Stosur rallied to break back in the fifth game with a backhand down the line, only to hand Errani a 5-3 lead with a double-fault and overcooked off forehand.

Errani didn’t need a second invitation, serving out the match after two hours and four minutes.